A Bit Worse Than Romeo

A Bit Worse than Romeo: Tragedy from Caprice is an inter-genre experiment, created in collaboration between the theatre and visual arts dramaturgies of the MeetFactory. The project is based on reinterpreting three texts: the canonical Shakespeare’s Romeo and Juliet, a novel titled Dark Energy by the contemporary German writer Juli Zeh and an extraordinary piece of writing by Søren Kierkegaard, The Seducer’s Diary. The result is an interdisciplinary, partly site-specific production on the edge of theatre and a monumental art installation. 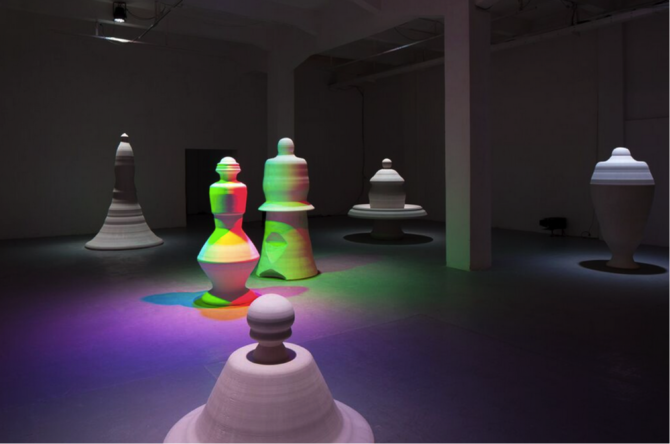 
The leading theme is the image of love as a paradoxical Archetype. In the name of searching for the meaning of life, the loving subject throws himself into a self-destructive abyss: tirelessly, over and over again, throughout the centuries. Non-ideologically, inexplicably, with a dose of genuine narcissism, inside the omnipresent stage set of love triangles, repeatedly hurt by their vertices. The project examines the theme of passion and seduction as an aesthetical act, at the same time exploring the motifs of abundance and excessive intellect, which can be both destructive and driving forces in life, in the present moment and immortality.

For the project A Bit Worse than Romeo Jan Haubelt, lecturer at the Sculpture Studio, UMPRUM (Academy of Arts, Architecture and Design) Prague, prepared an installation consisting of eleven monumental statues, their shapes derived from the motives of “ABDC” poem by Czech writer Vítězslav Nezval (1926), where Czech graphic designer Karel Teige presented a dancing concept of individual letters. Haubelt’s statues grasp this inter-genre and gestural principle by means of rotation transferring Teige’s signs into the third dimension. The statues become almost universal yet specific characters, assuming both the role of actors and autonomous art objects in the production. Another part of the installation is a brick wall whose strength contrasts with an imprint of a human body part. The wall thus becomes a reminder, a fossil of touch.

Jiří Thýn, graduated from the Photography Studio at the Prague Academy of Arts, Architecture and Design, prepared for the project A Bit Worse than Romeo a lighting installation based on his procedures applied in visual art, as well as on his search for a relationship with the theatrical means and Haubelt’s sculptural installation.