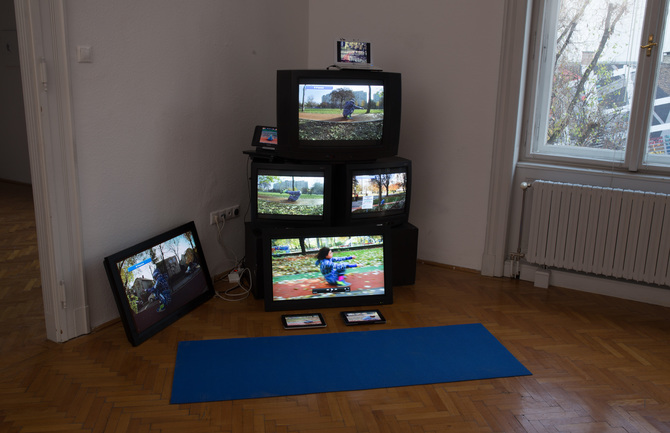 The central theme of this exhibition of three friends’ works is the phase of linguistic plasticity before language acquisition, when the solid and hierarchical rules and definitions of linguistic expression are articulated instinctively, crawling on all fours between signifier and signified, or without signifier and signified, across the joyful endless chaos of the realm of gibberish. The artists use various strategies to bring the audience to reexperience this glossolalia, which was forgotten in the process of language acquisition, and which has no grammar but only phonology.
Judit Fischer paints her images with meticulous attention to details. The everyday objects painted in the pictures were inspired by Virginia Woolf’s short story titled Solid Objects. Appearing in almost photorealistic perfection, their everyday functionality renders the objects to fade into being unnoticed – they are like (accidental) shapes built up from colour confetti, colour or black and white pompoms, paper covers for garden tables thrown into the waste bin after use, or bottle brushes. Besides concretely recognizable objects, there appear such embarrassing shapes as a duck stone holder or three-dimensional salt and sugar formations emerging by way of property transference.
Judit Navratil’s drawings titled Venomous caterpillar are memory books of change, transformation, self-protection, vulnerability and movement. At the same time, as a visual representation the rat-race dynamics of life’s Hurricanaan cycle, permanence and resting points, Navratil prepares the ground the foundation of the long-distance somersault movement, and the “making of” of her planned initiative debuts in this exhibition.
Zsófia Szemző series of drawings Fától az erdőt (Forest for the trees) approaches the gibberish phase in the state of naturalness from the angle of a layeredness and a kind of fragmentariness that makes interpretation impossible. On a wall loaded with her collages, reality and fiction intermingle infinitely. Absorbed in the closeness of nature, the video of the forest presents an event where the cause and effect relationships are almost incomprehensible, preventing the viewer from any rationalistic interpretation.
Gibberish attempts to lull the viewer to childhood’s tender state of glossolalia, a state free from any boundaries.
Mónika Zsikla