IN the frame work of our Inter Art Program we are pleased to announce Gábor Koós's first solo show at our partners, the SODA Gallery from Bratislave. At SODA Koós will present his price winning large scale woodcut series entitled Budapest Diary. 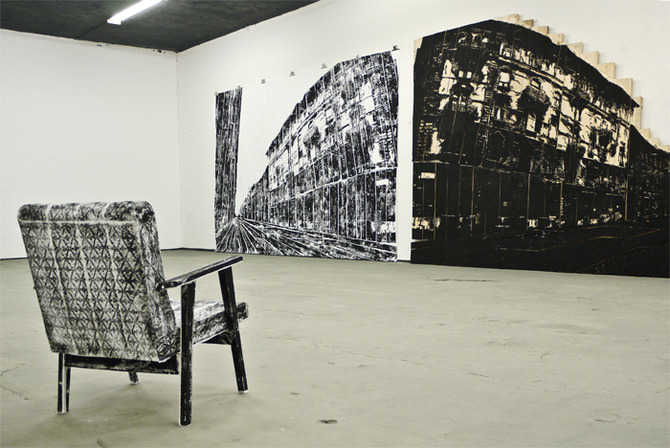 Koós Gábor’s works is about preserving. He records and documents personally relevant issues, object and places. This approach is in line with diary-writing and it grew out organically from his residency in Glasgow 2010. Koós uses two different techniques – direct-print (monotype) and woodcut – that are deeply rooted in the tradition of printmaking, but in a sense completely negate this tradition. Winning the Derkovits Gyula Art Prize in 2013 and 2014 not only offered the artists to show his work in the Budapest Kunsthalle , but also gave him freedom and time to intensively work and extend his 2013 started Series called “Budapest Diary”. The series consists of small direct printed objects and large scale woodcuts. The woodcuts are printed only once and are always exhibited together with their wooden matrix – this is a strong statement of the artists towards the unique character of his work as a printmaker and contemporary artist.

Koós Gabor (b. 1981 in Lucenec, Slovakia), graduated 2012 as “Master of Fine Art in Printmaking” in the Hungarian Academy of Fine Art in Budapest. In 2013 and 2014 he won the Derkovits Gyula Art Prise, which is the most important award in Hungary for emerging artists. Since then he had several exhibitions in renowned institutions and biennals, in the Kunsthalle Budapest; in the Institute of Contemporary Art, Dunaújváros; at the 25th and 26th Miskolc Graphic Triennal, 1st and 2nd International Biennial of Drawing and Graphic Arts in Győr, at the Ist Szekler’s Graphic Biennal in Saint George. As recently announced he won with his “Budapest Diary” Series the Prize of the Hungarian Graphic-Fundation at the Miskolc Graphic Biennal 2014 (Hungary).