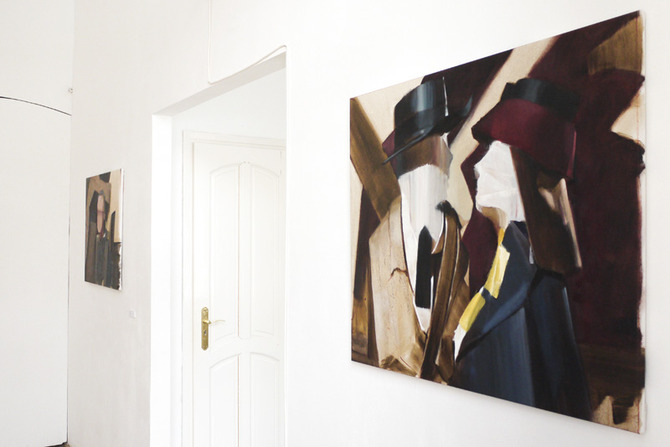 Initial point of all artworks are figurative representations and references, that the artists deconstruct, decompose or even destroy. It is the resulting state of transformation between the two most important and oppositional concepts in painting that set the the main focus of this exhibition.

The final artworks provide the viewer with a new, more complex understanding, where single and classical readings suddenly shift into multilayered possibilities of interpretation and meaning.

Géza Perneczky, beside his valuable role as an art historian, he also has a great oeuvre as an artist. Coming from a highly conceptual practice which contributed to the development of mail art, one can be surprised that the artist also created remarkable series of paintings, hardly ever exhibited so far. The artist’s main interest lays in the examination of classical painting motives. The chosen technique – watercolor on paper, which is actually not considered to be painting -  is owed to the importance of the process that must be rather quick when composing a series consisting of almost 1000 works!
With a simple sampling method, that includes an element of destruction, namely by slicing up the work, he turns his own works, once figurative and classical motives into vivid, abstract compositions. The achieved cutted and rearranged views create a visual experience (similar to the aesthetics of video clips) that question the classical motives and its given, one-sided readability. Since the process of destruction remains visible and does not ultimately destroy its figurative reference, the artist provides help to understand the emergence of the abstract language. Perneczky’s works suggests a new way of reading that plays with the expectations of his audience faced with classical painting genres.

Adrián Kupcsik describes the central term of the process of his newest painting series as “decomposition”. What he actually decomposes are highly detailed three-dimensional models, little dioramas of his chosen reference pictures, built from leftovers found in his studio. A finished diorama has only a short lifespan, since the artist immediately starts to manually decompose it, accompanied by photographic documentation. It is the artist subjective decision if a resulting photo becomes the final artwork or if this photo just serves as another reference for a ultimate translation into a painting. As a painter, Kupcsik is interested in questions about composition, the relation between figurative and abstract and the materiality. Like a stage designer, the flexible, multi-leveled process gives the artist precise control that leads to a more complex examination of his subject.

Since the diorama is based on reference pictures and at the same time built out of leftovers from former paintings the sampling of Kupcsik becomes not only a reinterpretation of iconic images but always includes a direct reflection of his own personal past as a painter alike.

Borsos Lőrinc will present a selection of small paintings out of their latest series called "Paradise Lost".  "Paradise Lost" is a series, which accumulates the artist’s mixed technique paintings created in the genre of appropriation, with a focus on the theme of Paradise. Borsos Lőrinc “remix” self-painted, historically canonized paintings of famous and unknown artists, by masking out figures with black enamel or by overpainting them with abstract geometrical shapes. For the viewer the black masking and shapes literally leave space for interpretations: thanks to the shiny black enamel the picture becomes mirror-like and invites the viewer to rewrite and update the ancient biblical stories. At least this is what Borsos Lőrinc themselves do, as they describe the context of the series: Rewriting the chosen Biblical themes addresses the period between 2004-2010, when the artist’s parents were involved in Neo-Protestant community activism; on the other hand, it builds a symbolic escape route from the crisis of values and the frustration experienced in today’s Hungarian society.

Following art histories view of abstract painting, the abstract shapes used by Borsos Lőrinc generally proclaim a objective and universal approach of interpretation and openly criticise the subjective and single narratives of the figurative.