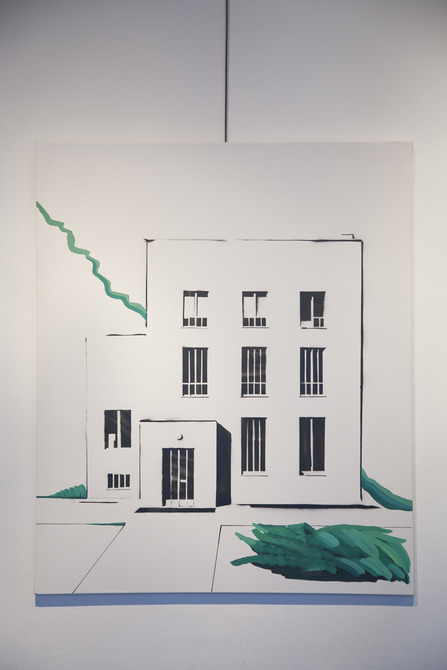 In the summer of 2012, we decided to try to create new facts, using old and new "things" in a sufficiently formed during the time of the "facts" space - Haus Wittgenstein in Vienna.
The works for the exhibition The Keyhole of Mr. Wittgenstein were created specifically for this project and especially for this house.

Referring again to our host, who said: "2.1 We make to ourselves pictures of facts... 2.12 The picture is a model of reality... 2.141 The picture is a fact."  We looked for those pictures that interpret and finally define/redefine the meaning of this place.

The project is builds on a very solid base and this base has three major pillars.

The first point of reference is Ludwig Wittgenstein himself. Here again we have two different options for reflection and analysis. On one hand, his personality and biography, on the other hand his philosophical works.

His biography is unusual enough. Born into a very wealthy family - he studied in Linz – at the high school where at that time studying and Adolf Hitler. Passed from deep religiousness and asceticism to convinced communist ready to emigrate to the Soviet Union. Sinking often depressed and hiding all his life his homosexuality. Formed as a philosopher under the influence of Bertrand Russell, but then denying the philosophy of Russell. A participant in the two world wars. From provincial elementary school teacher in a village to professor in Cambridge. A hermit in Norway and then in Ireland.

Ultimately, all this makes the image of Wittgenstein attractive, strange, bold, unpredictable, stealthy and phenomenal. Such as the character in the film by Derek Jarman of 1993. This image has all the qualities of a pop-culture icon in any largely turned and this of course makes it vulnerable to stereotypes.

The postmodernity obtruded some quotes from the Tractatus Logico-Philosophicus in a everyday life. So they turned to another pop-cultural cliché. Quotes for all occasions - often without any logical connection and completely contradicts of: " 4.003 …Most of the propositions and questions of philosophers arise from our failure to understand the logic of our language...". Today we can see his quotes even on the greetings cards.

The second important point of reference for The Keyhole of Mr Wittgenstein is the house in which we worked.

It was the home of the sister of Wittgenstein - Margarete. Paul Engelmann, who is a student of Adolf Loos, maked the basic layout of this modernist house. Throughout this time Wittgenstein worked with him. He is absorbed in the design process and reaches to the smallest details - the door handles or the exact location of the windows. The house was designed in 1926 and today it is present in every world architectural book - as a great example of modernist architecture.

Finally - the third source of inspiration was the history that brings with it the monument. “5.1361 We cannot infer the events of the future from those of the present." - wrote Wittgenstein.

Margarete and Ludwig were major figures in the Viennese art scene. Ludwig himself had supported financially Rainer Maria Rilke and Georg Trakl. The house was often visited by artists, writers and composers.

The National Socialism makes Margarete leave Austria and move to the States.
During the World War II the house was even used for a military hospital. Then remained empty and desolate.
In the 50s of the 20th century, Margarete returned, but no longer able to maintain this vast and dilapidated house. After her death, the property was sold.

At that time, the architectural value of the building was not unquestionable as today. The new owner had the idea to destroy it and build a large hotel.

Then began the protests of the Austrian Architectural Society. Led by Prof. Friedrich Kurrent, they organized many public demonstrations. The fight to save the house became international. Finally in 1971, the building came under the protection of cultural property law in Austria.

The new history of the house is associated with another historical reality of the 20th century. In 1975 the property was officially purchased of the Bulgarian state. At that time Bulgaria was behind the Iron Curtain – in the height of it’s socialist development. The major role in the purchase of the house plays Lyudmila Zhivkova – the first lady and a daughter of the socialist leader Todor Zhivkov. Haus Wittgenstein was named the Bulgarian Cultural Institute in Vienna.
There are many conspiracy theories about what the house was used during those years. From western stronghold of the communist "aristocracy" to a secret meeting place of the political espionage.
Today the Institute is representative of contemporary cultural policy of Bulgaria.

We decided to look through the Keyhole of Mr. Wittgenstein to all this historical background. Our eye is biased, however, because everyone participating in this exhibition has its own story associated with the house.

The artists were born in Bulgaria, but with one exception, they have long lived and worked in Vienna. They have "external" and "internal" perspectives. They know equally the Bulgarian and the Austrian cultural context. Logically, they have a connection with this place.

Kamen Stoyanov was doing a performance here before. He has read the Tractatus Logico-Philosophicus in front of the monument of the creators of Cyrillic alphabet - Cyril and Methodius in the garden.
Borjana Ventzislavova and Vasilena Gankovska heve dealt with this place in the context of the cultural policies.
Maximilian Pramatarov analyzed the visual and architectural structure of this object.
Michail Michailov organized his first exhibition here in 2002 and then decided to stay permanently in Vienna.
The only artist who does not live in Vienna is Daniela Kostova. She is based in New York. However, for her career this place has a very important role. In 1997 she arrived at the Vienna Academy for a workshop and she was placed in Haus Wittgenstein. This first visit here is crucial for her understanding of contemporary art.

Haus Wittgenstein is also very important for me. Many years ago, this house gave me the first direct contact with the classical modernist architecture. Then I felt what it is to inhabit this space. To climb the black stairs to the white lounge or to watch the garden over the strict and raw frames of the windows.

Perhaps Ludwig Wittgenstein himself is seen through these windows when formulated his thesis on the structure of the world and the role of the language.

In this project for me is important the effect, not the mechanism. That's why I'm looking to The Keyhole of  Mr. Wittgenstein as a presentation of effects provoked by mechanisms that have not been studied.

Today is December 21, 2012. In recent days, everyone spoke hysterical about the End of the World. The ancient Mayan calendar ends at this date. Obviously this is not the end of the world - at least as we fondly imagine it.

The problem lies elsewhere. “6.44 The mystical is not how the world is, but that it is" - says Wittgenstein.
Therefore, the project is named The Keyhole of  Mr Wittgenstein, not The Key of Mr Wittgenstein. It allows to look through the keyhole to the facts without being locked into propositions.

"7. Whereof one cannot speak, thereof one must be silent " - this is the last phrase of the treatise.