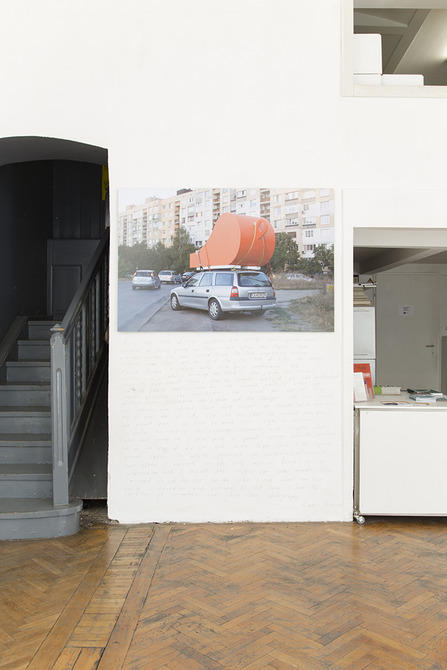 Kim Il-sung is the central square in Pyongyang. The project title manipulates a hypothesis that one day the regime in North Korea could be destroyed by… Twitter.

A bloody revolution of another square happened during the months we worked on this project - the Maidan in Kiev. We “were” all there through videos and posts on Facebook, YouTube and Twitter.

Our project is inspired by two major facts - the social and political protests around the world in 2013 and 2014 and the role of Social Media.

The exhibition interprets 3 real cases - against the financial system in the USA (Ahmet Ögüt), against the political order and corruption in Bulgaria (Kamen Stoyanov) and against the restrictions and the confused concept of European identity in Greece (Eleni Kampuridis).

The protests have different origins but they have one thing in common. Today they are born in the virtual environment that has different qualities and organizational methods and the traditional policy does not have yet the resources to fight successfully against the global network.

There is no vertical structure of organization - leaders and headquarters. The horizontal form is totally democratic but the disadvantage is that it cannot produce a serious political alternative, because the political parties have vertical structures.

The protests through social networks can be initiated literally in minutes. This speed allows previously unknown flexibility - both for the logistics and for the meanings and purposes. The disadvantage is that the speed of the digital system is much higher than the speed of response of the physical body.

And perhaps the biggest advantage of social media is that the information is not censored.

Eleni Kampuridis creates an installation that looks scary and at the same time ironic.
She uses a wooden model of a gun - as if someone had tried to make a toy for his child. To this weapon is attached a photo camera. The artist creates a simulation of the real environment during the protests - when the cameras are directed against the barrels of guns. The installation is interactive and invites the viewer to use the camera and then even social networks to spread the photo materials.

The video by Ahmet Ögüt was filmed in 2011 at the epicenter of the Occupy Wall Street movement.  The title is suggestive of the acronyms often used by law enforcement services and military forces to identify and single-out individuals. The identity and goal of the video’s main protagonist remains unclear. It alludes to the supposed anonymity of those involved in protest movements and the shifting terrain between power and impotence, perpetrator and victim.

The second project of Kamen Stoyanov connects protests from the communist past of Bulgaria (1980s) with the present. There is a story of a transfer of the forbidden book Animal Farm from Austria to Bulgaria. The participants in this performance taking their anger out on punching bags which they created themselves, while the artist walks around and reading passages of Orwell’s book.