Recording the State of Liberation in Contemporary Drawing 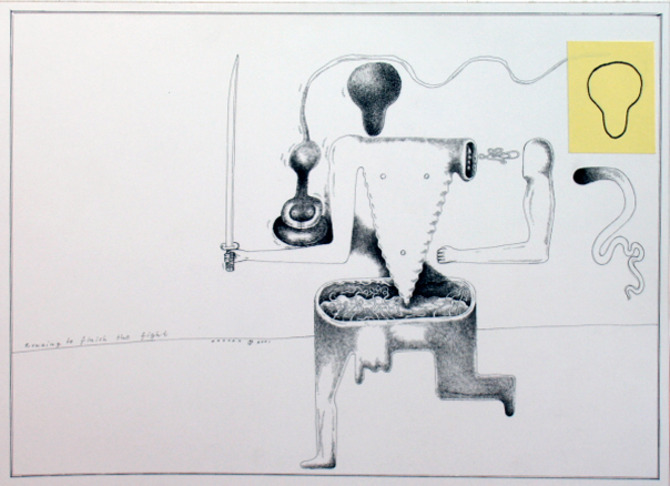 
The institutional level of a graphic art collection may be the only place where drawing is still tied to the idea of a classical separation of genres – in todays artistic practice genre thinking is outdated, contemporary drawing got rid of any kind of institutional or historical restrictions.

The group exhibition at Chimera-Project records this state of liberation in contemporary drawing. To process the newly achieved diversity the curators selected positions that are specifically committed to the boarders of the medium.

Stefan Tiefengrabers exhibited work denies and at the same time reflects one of drawings most obvious characteristics: The authorship of an artwork, ever since symbolically cumulated in the (drawing) hand of the artist. The Austrian new media artists mechanical drawing device frees his masters hand from any rational or even subconscious creation by recording the movements which it is exposed to when shipped to the exhibition space. The artist avails himself of an artworks normal journey and secretly outsources the meaningful act of creation to FedEx and others involved in the shipping process. Tiefengraber’s work can be seen as materialized version of Sol Lewitts quote: The idea becomes a machine that makes the art!

The process of creating a drawing is also central in Koppányi Péters latest works. But this time it is the artist himself that acts patient and precise like a machine. Else known for his abstract and raw drawings with a subjective impetus, the new series follow a strict conceptual approach. In “Encyclopedia of Nothing” Koppányi systematically condenses his lines to a black plane that renders the nothingness of the white paper into basic shapes. Th drawing becomes an elaborated nothing, the process of creation gains more importance and unveils the true interest of the artist, that is more in the act of drawing rather than the final artwork itself.

The selected works of Wahorn András are based on the rearrangements of his post-it drawings obscessively created in Los Angeles between 1994-2001. Wahorn uses his post-its as starting points of new compositions and also vice versa by completing and re-interpreting already existing drawings. Not only visually the post-it with its dominant colours and formats produce tensions. As an everywhere placeable and any time removeable carrier with its temporary, functional and mass-producted nature the Wahorns post-it oppose the concept of originality of an artwork and redefine it.

The figures of Baglyas Erika’s drawings come to the composition as an indigo print. The materiality of this indigo silhuettes differs sharply from the other elements of the drawing, also due to their technical mediation and indirectness: the with indigo transmitted thin and somewhat irregular drawing defines not only the shape of the figure, but its fragility and isolation as well. The resulted scenarios carry a melancholic, sometimes heroic, sometimes ironic atmosphere, which is the reading of the artist about the everyday struggeles of the 21st century man.

Németh Róbert is know for his site-specific installations that are all based on drawing. By working with the three-dimensional space Németh’s drawings changes the canonized view of the medium and physically involve his audience. Interested in the interaction between real and pictorial space and the viewers involvement, the artist uses uv-paint and blacklight to further influence this experience. For Chimera-Project Neméth guides the audience into the galleries hidden storage room, where curtains seem to hide something – but taking a closer look will automatically lead to disillusionment. The site-specific and temporary installation can be seen as a critical comment on hidden mechanisms of an art institution in general that it-self actively refuses to reveal certain strategies or secrets to a broad public.

The origin of the wearable object seen in Delphine Pouillé’s recent video work “Umbilical Parade” are the artists well known creations, the so called “thrums”: Consisting of a fabric membrane filled with polyurethane, these blown up drawings literally take shape. Earlier the “thrums” colonized the exhibition space and started to interact with the viewer. On the search of a new kind of interaction, the “Umbilical Parade” now brings Pouillé’s drawn objects into the public space of Taipei. By interlinking the human bodies with the artist’s wearable object a strange new entity is born that disturbs the urban audience, but also confronts the people from Taipei with more current topics of cloning and mutation. In her work, Pouillé precisely examines the medium of drawing, runs tests ceaselessly, changes its context and further develops the results to find new meaning and qualities that go beyond the classical “pencil on paper”.