Biological sciences do not distinguish “weeds” among plants, so assigning a plant to this category depends on the economic and cultural context. A weed is not always a weed, and not everywhere. The same plant can simultane-ously function as a medicinal plant, a decorative one, or fall into the group of Plantae Malum – “evil plants,” which, un-like ornamental plants cultivated in gardens, are not in-tended to be looked at. They deserve neither the space they take up nor our glance. We avert our eyes from them because they seem unattractive, unwanted and inappropri-ate. Anna Kędziora has used them to create a herbarium of rejected plants. Using a sensitive visual language, she re-stores their value, moving them from the margins to the centre of attention and including them in the vivid botani-cal imaginarium. Are these artistic gestures enough to make Plantae Malum beautiful (Plantae Pulchrum), and therefore good? 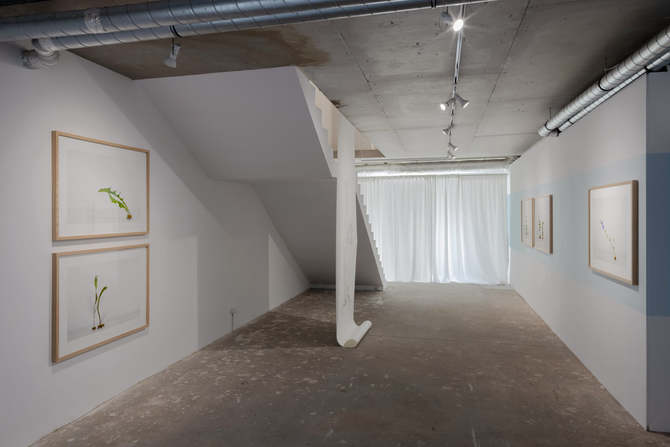 We barely speak of them and their name escapes us. Philosophy has always overlooked them, more out of contempt than out of neglect. They are the cosmic ornament, the inessential and multicolored accident that reigns in the margins of the cognitive field. The contemporary metropolis views them as superfluous trinkets of urban decoration. Outside the city walls, they are hosts—weeds—or objects of mass production. Plants are the always open wound of the metaphysical snobbery that defines our culture.[1]

This quote from the introduction to the book The Life of Plants. A Metaphysics of Mixture by Italian philosopher Emanuele Coccia highlights our dual attitude towards plants, depending on the context in which they appear. The same organism can have a completely different status in various cultural or economic spaces. The example of plants classified as weeds serves as the best illustration. Biological sciences do not distinguish this category at all, so assigning a plant to it depends on the circumstances. A weed is not always a weed, and not everywhere. One floral species can simultaneously function as a medicinal plant, a decorative one, or fall into the group of Plantae Malum – “evil plants.”

All the adjectives and phrases used to describe these undesirable organisms come down to one keyword – “wildness,” understood as an extreme, untameable state, excessive fertility, uncontrollable growth. As the Concise Oxford Dictionary suggests, “weed” is a wild plant growing where it is not wanted and in competition with cultivated plants.[2] It belongs neither among agricultural crops, nor in manicured parks or gardens, where it nevertheless spreads spontaneously. Forced to adapt to life anywhere, it seizes moments of human inattention or neglect. Even a cursory examination of the behaviour of plants considered as weeds reveals their amazing ability to co-evolve with humans, develop new strategies for survival and growth. They can successfully adjust to any environment, even one that has been deeply changed by intensive farming orindustry. Some of them are botanical doppelgangers, mimicking the appearance and growth rate of cultivatedcrops – their survival thus depends on the difficulty of telling them apart. Their greatest crime is failing to conform to human rules by appearing in places allocated a different function.