Around the Family Table

The project Beyond Nuclear Family, initiated by the Jindřich Chalupecký Society as part of the long-term research project Islands: Possibilities of Togetherness, evaluates the family as one of the basic units of togetherness found in human communities. The project is aimed primarily at offering a critical review of the modern, western family model, assessing its historical and contemporary, geographical and cultural, utopian and fictitious alternatives. The nuclear family, defined as the marital partnership of a man and a woman living with their biological children, represents an unwritten status quo in western culture. Despite the fact that this model does not correspond to all contemporary realities, it has become a standard against which other family constellations are measured, a leading paradigm throughout the political, social and educational system as well as the rule of law in the European and American contexts. 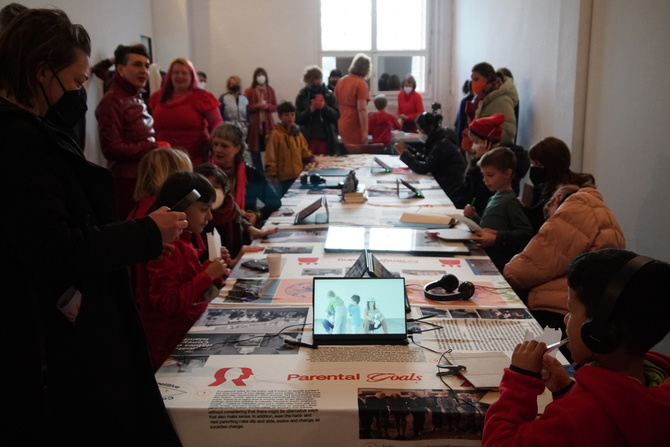 Beyond Nuclear Family: Around the Family Table, presented at alpha nova & galerie futura, is one of three interconnected exhibitions (further exhibitions will follow at Display in Prague and at EFA Project Space in NYC). It focuses on gender roles within the family, the representation of LGBTQAI+ families, the concepts of motherhood and women's corporealities, as well as on other forms of communality beyond biological connections and in relationships with other beings beyond humans. It even examines the absence of family, particularly in light of the Covid-19 pandemic, and its impact on the definition and (non)functioning of the family. The exhibition does this through a variety of formats, including performance, video, text, textile works, sculpture, performative readings, discussions, and research presentations.

The main theme of the exhibition, which influences its structure and concept, is a family table around which the artworks are gathered. In this sense, each artwork represents another “family member” and a different approach to what a family was, is, or could be. There are some empty spots left at the table in order to indicate that we (the curatorial team) are aware that the exhibition doesn't represent all possible positions and that the table is symbolically open for other potential “family members” to join in. The table is covered with five tablecloths that show collages of images and texts related to the five main parts of the Beyond Nuclear Family project: Parental Goals, Utopian Family, Family and Gender, Family Housing, Absence in Family. The tablecloths can therefore be seen as a discursive background for the exhibited art, or as side notes leading the viewer to the broader context of the show.

Two feminist collectives play a significant role in the show: Mothers Artlovers (CZ) and MATERNAL FANTASIES (DE). Their practices have many similarities, but this is the first occasion on which they have worked together. Both collectives focus on motherhood and parenting through collective artistic processes while researching the possibilities of alternatives to traditional structures of art production. They deliberately connect personal positions with artistic practice, whether through community-oriented experiments, performances incorporating children, or applying care as a principle into both the representation of artwork and internal collective functioning. One of the outcomes of sharing these thoughts and practices between the two collectives is a performance called Why did love letters fall out of fashion? which will be enacted during the opening of the exhibition, and in which the artists’ children are also engaged. They also influenced the architecture in a way that felt good to them, creating a site-specific, child-friendly environment. The table, with its inflexible structure, is contrasted by Mothers Artlovers’ organic installation representing a body and inviting real bodies to interact. This textile object, devoted simply to the joy and relaxation of both children and adults, is framed by a large photograph documenting a Women’s Day performance by Mothers Artlovers. In this action, the artists reacted to MATERNAL FANTASIES‘ original video-piece Suspended Time, On Caring (2020) which takes a spot at the end of the table. Next to it, you can find two other videos by these collectives which follow the same strategy of re-enacting the artworks as a tool for getting to know each other’s artistic practice. In this case, Mothers Artlovers respond to the work Love and Labor. Intimacy and Isolation. Care and Survival, (2020), an online performance by MATERNAL FANTASIES recorded at the beginning of the Covid pandemic. Mothers Artlovers have recorded their online performance as a response to this piece two years later, giving us the opportunity to see the subtle changes visible in the current situation.

A special piece on the table is the Family Album, created in 2020 on the occasion of the first public presentation of the Beyond Nuclear Family project in Prague. The album has been growing since then. It comprises drawings, texts, photographs and other contributions by Czech and international artists, curators and theorists who have previously participated in the Jindřich Chalupecký Society's programs and therefore can be symbolically seen as part of the broader JCHS family (Khairani Barokka, Catherine Biocca, Triple Candie, Lenka Klodová, Michelle Lévy, Laure Prouvost, Egill Sæbjörnsson, Tai Shani, Jakub Woynarowski). The contributors were invited to reflect on conventional or assumed family structures, as well as their own personal positions on their current family structure or the one in which they grew up. The album is open to development, which is why it currently contains several blank pages, which will gradually be filled with the works of others.

Six further artistic contributions by artists based in Prague or Berlin can be discovered around the family table:

Sophie Utikal dedicates her textile works to experiences such as pain, transgenerational trauma, and the alienation from one's own body with regard to white normativity. The partly large-format embroidered textile images also offer poetic answers for possibilities of healing, security, other forms of knowledge and empowerment through participation in community and through connecting with other people as well as non-human beings. The starting point of her work is always her own brown body, which she relates to other protagonists. The work Interconnected (2022), newly created for the exhibition, shows the artist in close connection with her dog. The intimate scene forms the center of this fragile, partly semi-transparent textile work, which stretches in the form of tentacle-like arms of varying lengths in all directions across the table - searching for or offering new connections.

Marie Tučková presents one part of her long-term film project The Polyphonic Womb, in which she explores the potential for feminist and queer survival and reproduction. The concept of the polyphonic womb represents a space of continuity, cyclical patterning and sonic resonance, where poetry, songs and theoretical texts intermingle in a non-hierarchical way. The film includes a number of distinct stories, which Tučková has developed in collaboration with a number of other artists. The co-author of the chapter presented in the exhibition is the performer and dancer Iga Świeściak. The polyphonic combination of image and sound creates a wistful ballad about the non-normative relationship between mother and child, the refusal to be born and fed, and the refusal to give birth and feed, simultaneously highlighting relationships beyond the human sphere and the interconnectedness of life.

For her long-term project [anderkawer], Annette Hollywood goes as a "detective" on the partly buried and erased traces of non-heteronormative families in Germany from the 1920s until today/the present as well as the associated discourses around ideologies of family and motherhood. The search for testimonies of these families, who often lived in secrecy due to discrimination and its consequences, leads the artist into queer and historical archives, whose materials she stages in a filmic-performative way. In Beyond Nuclear Family: Around the Family Table she presents two episodes: one focusing on the decade of the 1920s with its social and cultural awakening and the second on the 1930s, which is already completely dominated by the repressive National Socialist regime. The immediate break is literally palpable. The song at the end of both episodes, however, gives hope for a different, colorful and, of course, queer future.

The pointy-chested characters of Zoë Claire Miller's A Whisper Network (2020) have taken their seats at the family table on books that served as research for the Beyond Nuclear Family project. A whisper network is the term used to describe an informal and private chain of information between women. Often, these specific networks share experiences regarding sexual harassment and sexual violence and warn each other about individuals. In the context of the exhibition, this group refers to solidary (feminist) structures that emerge outside of biological family constellations. The ceramics thereby also bring the concept of the elective family into focus. This self-chosen and self-designed type of family can play an important role for all those who, for example, have little or no contact with their family or have been rejected by it, in order to experience love, care, security and belonging.

Marie Lukáčová presents a short work-in-progress version of her film Chosen, created specifically for the Beyond Nuclear Family project. The script was written in collaboration with curator Tereza Jindrová. The main character of the film is the gender non-binary hero*ine Ariel, whom we encounter at different stages of life. In the featured cut, Lukáčová invites us to the family table, where we are introduced to various members of Ariel's chosen family, including the snake El Koko, their most beloved creature. The finished film will be presented in later BNF project exhibitions.

Sophia Süßmilch understands the body as a toy and as a place of childishness. Her works are always quirky and witty, creating matriarchal worlds in which the male gauze no longer seems to play a role. In her photographs, Süßmilch often stages herself with her mother, among others - as in the work 1 Meter Fünfzig (socially distanced portrait with mother) (2020). Made during the first lockdown in Germany, the work references infection control measures to contain the coronavirus, citing the recommendation to keep at least 1.5 meters away from other people. In this way, Süßmilch's photographs also expand the image of the figure of the mother. The mother appears as humorous, funny, playful to radical.

As a whole, the exhibition is a colorful and festive mosaic of various experiences and imagery regarding the definitions of a family. It is a celebration of diversity. A great deal of humor and irony is found around the table, as well as a lot of love and affection. Yet, as it often is the case with family dining, we can also sense unspoken questions and tension hovering in the air. The aim of the exhibition is to invite the viewers to literally sit around one table together, at least for a while, and attempt to contemplate our preconceptions, memories, traumas, expectations and dreams connected with the idea of the family.