The Worlds of Jindřich Chalupecký 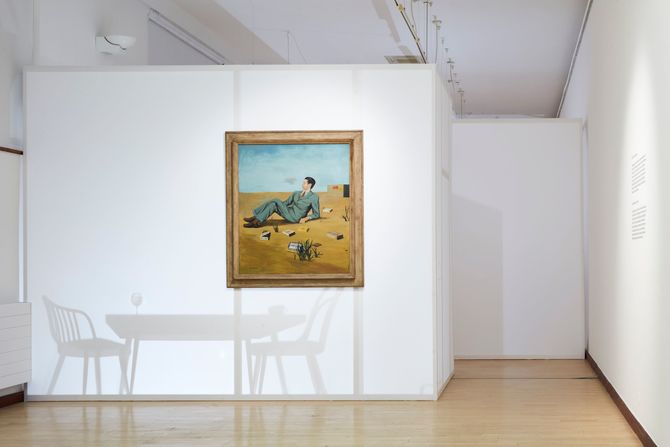 This exhibition on the life and work of Jindřich Chalupecký, theorist, critic, curator and essayist, arose as an attempt to bring society closer to the intellectual heritage of this enduring figure of Czech culture. It is also the aim of the exhibition to point out the potential role of a theorist or curator in society and their unique ability to connect diverse personalities, places and spheres of interest. Such a person uses the line of their own thinking about the world to outline the position that art occupies in the contemporary world. The intention of the project is not to create a symbolic monument to Jindřich Chalupecký, but to reflect, through a dialogue between historical works and the work of contemporary artists, writers, philosophers and other personalities, upon the relevance of Chalupecký's ideas and activities for today's world, and on their potential to support us in these times, which are difficult from the point of view of art, politics, and humanity.

Throughout his life, Chalupecký promoted and advocated new directions in art and was interested in broader questions around art, primarily with the meaning of art in modern society. He was a proponent of connecting art with life. In today's terminology we might venture to call it ‘activist’ or ‘engaged’ art. He did not believe in the purely aesthetic function of art or of culture generally. Chalupecký’s wide range of interests and influence guarantees that exhibition viewers will, in one form or another, encounter a substantial portion of 20th century cultural and intellectual history from the Czech and, by extension, international contexts. The exhibition gathers the work of over 60 artists over several generations, from world-renowned international figures such as Marcel Duchamp and Ilya Kabakov through the Czech artists of the post-war era, to the reflections of contemporary artists such as Anežka Hošková and Václav Magid.

The diversity and complexity of Jindřich Chalupecký’s life and work also determines the layout of the exhibition: a collection of a number of apparently separate sections divided not only thematically, but also formally. There is an abstracted perspective of Chalupecký's apartment in Vršovice, a reading room with insights into Czech and Slovak artworks, a site-specific section dedicated to Marcel Duchamp and the Russian artists with whom Chalupecký was in contact in the 1960s and 1970s. The exhibition also includes “cabinets,” in which historical and archival materials intermingle with the observations and interventions of contemporary artists. The exhibition attempts to work with forms of documentation and current readings of historical events and artworks in an unorthodox manner.