Do you like salmon? This food, which just a decade ago was perceived as a luxury in the Czech Republic, in some homes replacing the traditional Christmas Eve carp dinner, is now widely known and accessible here. Salmon can be found on the menus of both gourmet and fast-food restaurants. It has not decreased in popularity even after media stories of toxicity in mass-farmed fish or when, in 2016, the Ministry of Health warned against the consumption of wild fish containing the parasite that causes Anisakiasis. The dilemma of choosing between Norwegian and Scottish salmon riddled with antibiotics and the more expensive wild salmon (which is also not risk-free, potentially containing harmful substances directly from polluted oceans in addition to parasites) might perhaps be ‘resolved’ with a new model of inland salmon breeding, the wish of Czech entrepreneurs with a vision of a “Central European sea,” some of whom would reportedly even be happy to swim with their salmon. 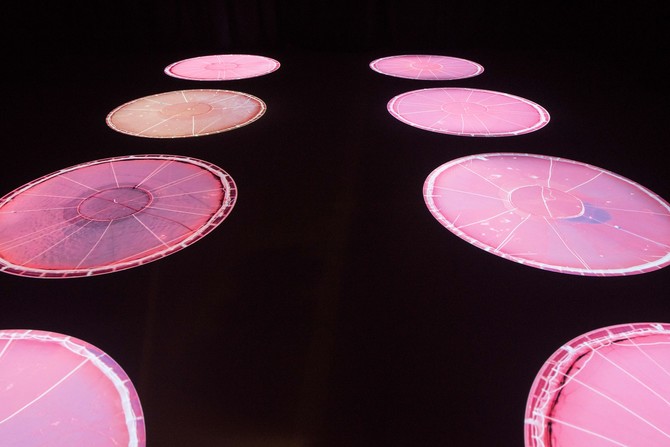 However, few people are actually aware that salmon has been in the Czech lands for a long time. Up until the Middle Ages, in fact, it was an important staple in the Czech diet. Until the introduction of carp pond farming in the 12th and 13th centuries, the Atlantic salmon (Salmo salar) was, nutritionally, the most important fish. In great numbers, salmon migrated annually from the end of winter to the late autumn up the Elbe river and its tributaries to their spawning grounds in mountain rivers. However, intensive fishing and, more importantly, the construction of high weirs and, in the 20th century, dams, caused the definitive disappearance of the Czech salmon. Since 1998, there has been a project to bring the wild salmon back to our rivers. The gene pool of the extinct Czech salmon is being replaced by breeds from Ireland, Sweden and Norway.

The art duo Cooking Sections (Alon Schwabe and Daniel Fernández Pascual) is concerned with how global power and economic structures are manifest in the context of food: what we eat, where our food comes from, how it is distributed, processed and consumed, who benefits and who is exploited. The artists are engaged with observing systems that organize the world through food. Using site-responsive installation, performance, mapping and video, their practice explores the overlapping boundaries between visual arts, architecture, ecology and geopolitics. Though it originated within a British context, their multimedia installation Salmon: Traces of Escapees still has something to say even to the public at the Moravian Gallery in Brno, because it introduces salmon as an actor in global developments and simultaneously raises questions about the evolution of the local (natural) environment, agricultural production and diet.

An eight-channel projection on the gallery floor reveals to us the absurdly tragic existence of salmon in giant net cages: “The installation explores the environmental impact of salmon farms in Scotland, which can be traced far beyond the circumference of open-net pens. Excrement, drugs, synthetic colour, and parasites billow out, polluting the surrounding waters. But even if the nets break, farmed salmon remain captive; they can no longer escape their own modified bodies. Salmon: Traces of Escapees is a recognition that nothing can be removed without leaving traces, no divestment can be disassociated from extractivism, and no domestication comes without the colonisation of the gut.”

The project is the second chapter of a trilogy around food production based on extractive systems that push the environment to the verge of collapse.

The first chapter of the book Salmon: A Red Herring addresses the phenomenon of “salmon” pink. In this project, the artists drew attention to the practice of feeding dye to salmon to satisfy consumer expectations of salmon meat, thereby boosting its marketability. In Cooking Sections’ delivery, then, the salmon color represents change both related to our planet itself (whose palette is being increasingly transformed by human activity, including the farming of dyed salmon) and of our perceptions and expectations of what is “of nature” and “natural.” Another potent theme of the Moravian Gallery exhibition is the gulf between how we perceive reality and how it truly is. The reality of salmon production and consumption is conveyed here with the image of a closed circle of intensive farming from which, ultimately, it is impossible to escape.

In this context, salmon becomes a representative theme, a case study, revealing a much wider context for our existence in the world and its interconnectedness with other entities and systems. The domesticated, “cultivated” fish, whose existence has been subjugated in its entirety to the utilitarian needs of humans, is a silent witness and a living agent of change, of both its own body and the environment.

As the exhibition describes, salmon is an identifiable tool of colonization - whether on a macro scale (see the example of the Maori populations of New Zealand) or in the microscopic reality of our own intestines. In the narrative of the exhibition Salmon: Traces of Escapees, emphasis is placed on the semi-permeable quality of the net, reminiscent of Australian philosopher Astrid Neimanis’s fascination with the functioning of membranes. For Neimanis, who espouses the concept of hydrofeminism, it is water, which suffuses all living and nonliving bodies, that is the ultimate/supreme actor in the interconnectedness of the “individual” with other individuals, and with the entire world at large. Consequently, in the spirit of post-humanism, then, it subverts the very notion of a delineated individuality. Cooking Sections, in this vein, use the example of the salmon to trace the “fluidity “ of genetic information and show us the metaphor “of the impossibility of escaping from a cage in which we have never lived...” Escape is a fallacy. There is no such “outside” beyond the post-species body or the postindustrial habitat. Humans are a virus from which salmon cannot flee.”

The goal of Cooking Sections’ work, however, is not only to raise a warning finger and illustrate the destructive effects of human activities. An integral aspect of the duo’s projects is a proactive approach based on education and attempts at slowing the negative environmental changes, such as the loss of biodiversity or the destruction of the ecosystem. The artists use the aesthetic and emotional impact of their work to share information with the public that is supported by their intensive research. The exhibition Salmon: Traces of Escapees, which premiered in the autumn of this year in the context of the Turner Prize, is one element in their long term project CLIMAVORE (rather than herbivore or carnivore), the goal of which is to provide insight as to how to eat as humans change climates. Cooking Sections cooperates on this project with seafront communities, promoting alternative ingredients such as seaweeds, sea vegetables and bivalves, which improve soil and water quality, while cultivating marine habitats. The discussion engages experts in ecology, marine biology, agronomy, nutrition, and engineering, among others.  Becoming CLIMAVORE is a project within the concept which goes beyond gallery walls, appealing to gallery and museum restaurants to take salmon off the menu and bring in special meals (CLIMAVORE dishes), which refrain from disturbing either the local or coastal ecosystems, but in fact participate in regenerative processes in the production of the ingredients that are used. In conjunction with the exhibition at Pražák Palace, the gallery's restaurant Café Morgal will also be involved in the project.

Cooking Sections (Daniel Fernández Pascual & Alon Schwabe) live in London and Lisbon, and work around the world. They describe their work as “spatial practice,” moving in an interdisciplinary sphere in which art and architecture meet geographical, economic and sociological research. It is important for them to find the intersections between local events and global infrastructures, whether financial or technological. In 2014 they participated in a presentation in the American pavilion at the Venice Biennale and have exhibited at the Sharjah Biennale 13 and at Manifest 12 in Palermo in 2018. Their work has been exhibited at

the Serpentine Galleries in London, Neue Nationalgalerie in Berlin, Storefront for Art & Architecture in New York, HKW in Berlin and the Peggy Guggenheim Collection in Venice. The artists currently run one of the studios at the Royal College of Art in London and are guest professors at the Academy of Fine Arts in Munich. In 2019, they were awarded the Special Prize at the Future Generation Art Prize and were finalists in the Visible Award for socially engaged artistic practices. In 2021, the duo was nominated for the prestigious British Turner Prize.