Ella Littwitz, If Everything That Exists Has a Place

If Everything That Exists Has a Place is an exhibition consisting of the artist's most recent works, these were the result of numerous visits and research carried out on the Jordanian-Israeli border, in the southern part of the Jordan River, near the mouth of the Dead Sea. 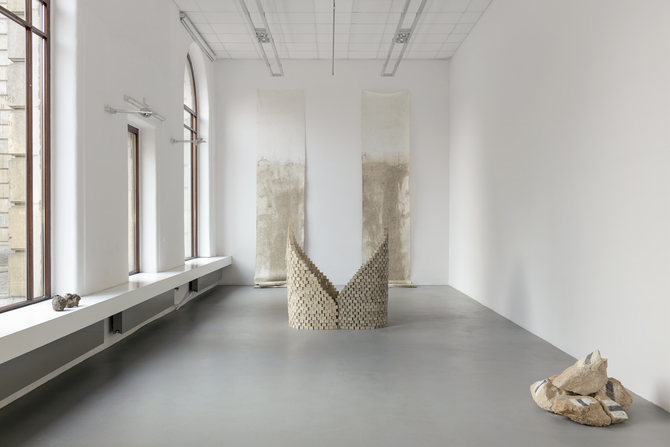 
The main destination of these expeditions was Qasr al-Yahud. According to Christian tradition, Jesus was baptised there, and according to Old Testament legends, the Israelites entered the Promised Land through Qasr al-Yahud after wandering in the desert for forty years. Ella Littwitz's work draws on the biblical narratives of the site and the geopolitical issues layered there, which are constantly intertwined with history, mythology and ideology. Many of the objects in the exhibition refer to the human need to delineate areas and territories, which are in turn obliterated and altered by natural factors, their boundaries thus emerging from interlocking processes. Littwitz sees the inextricable link between human and non-human activity, the historical causality of both forces. The artist also poses questions about the status of the objects presented in the exhibition, their lability, and about what creates the specificity of given places and influences the ways they are experienced.

Littwitz's artistic explorations focus primarily on archaeology, history, nature and agriculture as elements relevant to culture and geopolitics. In her work, the artist reproduces and recreates various artefacts, as well as certain plant species which are significant in many respects. Using these motifs, Littwitz reveals the mechanisms behind concepts such as national identity, political or geographical borders, redefining common beliefs and convictions.

The artist's work, including her new works in the exhibition If Everything That Exists Has a Place, often refers to themes directly associated with Israel. Thus, issues relating to archaeological research, political and historical narratives appear in her work, while those related to territorialisation are consistently recurring. Littwitz's installations, sculptures, drawings and embroideries address the issues of conquered territories, the so-called no man's land, mixed territories, borders and migration.