Beyond Nuclear Family is the title of a research and exhibition project which was originaly designed to be presented in Art in General in New York from May to July 2020, but was postponed due to the pandemic of Covid-19. Meanwhile, the curators have decided to host an event for the Czech public in the form of a pop-up exhibition featuring the works in progress along with a participative program including creative activities for families with children and a public debate on themes brought by the current pandemic situation and its impact on human coexistence. The exhibition presented brand new commissions created by Czech artists Eva Koťátková, Marie Lukáčová, Markéta Magidová, Vojtěch Rada, Jirka Skála and Martina Smutná. 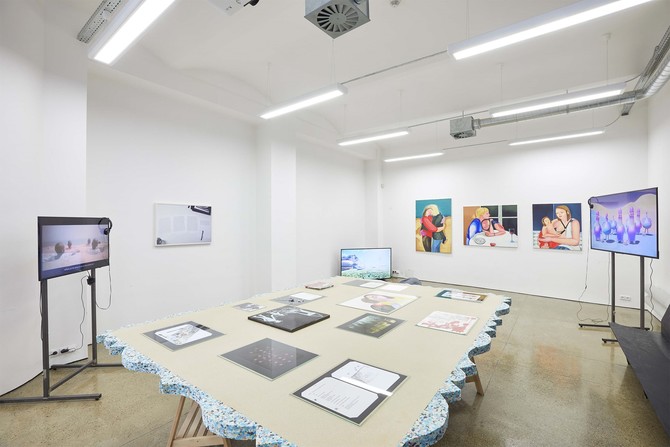 Beyond Nuclear Family is a third chapter of the Jindřich Chalupecký Society’s long-term project Islands: Possibilities of Togetherness, which presents experimental exhibition formats, research-based and discoursive projects in collaboration with international partner organizations. The project explores the themes of togetherness and coexistence in the challenged contemporary societies, while each chapter contributes to the topic from a particular perspective, such as the theme of connectivity or interspecies solidarity.

The chapter Beyond Nuclear Family assesses the family, one of the basic “units of togetherness” in human communities. It is aimed primarily at providing a critical review of modern, western family model and its historical and contemporary, geographical and cultural, utopian and fictitious alternatives. A nuclear family defined as the marital partnership of a man and a woman living with their biological children represents an unwritten status quo in western civilization. It has become a kind of benchmark against which other family constellations are measured.

Although the nuclear family is considered and presented as the leading paradigm throughout the political, social and educational system as well as the rule of law in the Euro-American context, in reality, this model represents fewer than 25% families in the USA. Two more thirds of the population are thus made up of other forms of family and community life: unions of LGBTQ couples, adoptive parents, single parents, chosen families and other constellations. Despite this fact, the image of the typical nuclear family still dominates popular culture and advertising, thus co-shaping the attitudes and expectations of the broader public.