The painter Pavla Malinová has chosen to invite the sculptress Anna Hulačová to share the exhibition dates at the Oblastní galerie Liberec (Liberec Regional Art Gallery) granted to Malinová as a finalist in last year’s Jindřich Chalupecký Award. This is our first opportunity to see their work side by side and consider that their shared points of departure, up until now sensed by each artist in her admiration of the other's work, may be more extensive than they thought. 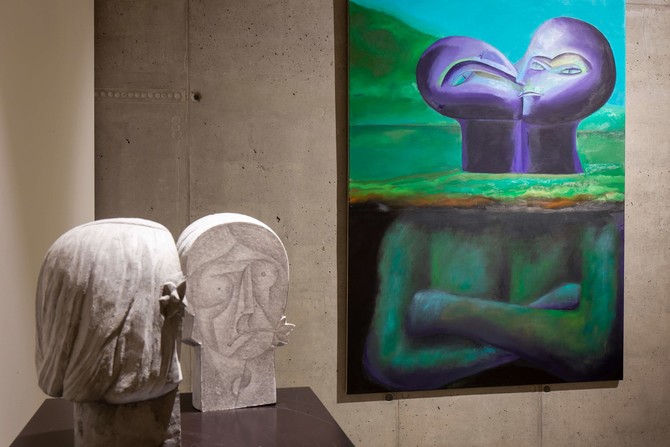 It is immediately visible that their works intersect in the realm of shaping. The core of the joint exhibition is precisely focused on capturing (the rendering of) a figure, emphasizing the head and bust. Yet each artist has her specific manner of working with figures, characteristically employing a certain schematization and formally inspired by classical, medieval, folk and non-European prototypes, among others. The curatorial selection for this exhibition was also guided by an even more concrete link between Malinová and Hulačová in their current work, referred to in the title of the exhibition Intertwining: the reproduction and mirroring of figures / faces or organisms, which seems to create one fused, hybrid whole. The predominant theme here is the intertwining of the figure and natural or organic matter.

It is just this connection - literally the individual’s growth into one being with the environment or with others, including the non-human (whether plants, other animals or the earth itself) that we can perceive as the exhibited works’ ethical imperative. Malinová and Hulačová demonstrate respect for a holistic view of the world; a world in which humans are neither inseparable from nor superior to nature and other living and non-living entities, but inextricably bonded to them. Pavla Malinová's interest in ancient and primitive masks, visible primarily in her exhibited drawings, also bears witness to the sensitivity vis-a-vis non-Western and pre-modern cultures.

The works of both artists could thus be related to posthumanist thought as proposed by the Italian philosopher Rosi Braidotti, according to whom “the point about posthuman relations, however, is to see the inter-relation human/animal as constitutive of the identity of each. It is a transformative or symbiotic relation that hybridizes and alters the ‘nature’ of each one and foregrounds the middle grounds of their interaction. This is the ‘milieu’ of the human/non-human continuum and it needs to be explored as an open experiment.” Braidotti states, among other things, that in the interest of our future and the future of the environment, it is important to reject the dialectic of otherness that serves to exclude (whether based on gender, race, animal species or the concept of "normality") and to overcome the anthropocentrism that positions humankind at the center of the universe. “Once the centrality of anthropos is challenged, a number of boundaries between ‘Man’ and his others go tumbling down, in a cascade effect that opens up unexpected perspectives.” […] Animals, insects, plants and the environment, in fact the planet and the cosmos as a whole, are called into play. Posthumanism in the sense of post-anthropocentrism displaces the dialectical scheme of opposition, replacing deeply-established dualisms with deeply zoe-centred egalitarianism between humans and animals. The vitality of their bond is based on the sharing of this planet, territories or environments under conditions that are no longer so distinctly hierarchical or self-evident.” (R. Braidotti: The Posthuman, 2013)

The posthumanist philosophical perspective is now complemented by scientific knowledge, as competition is no longer considered the central principle of life, but symbiosis, thus altering the view on the category of the individual: “The discovery of symbiosis throughout the animal kingdom is fundamentally transforming the classical conception of an insular individuality into one in which interactive relationships among species blurs the boundaries of the organism and obscures the notion of essential identity […] Symbiosis is becoming a core principle of contemporary biology [...] These findings lead us into directions that transcend the self/nonself, subject/object dichotomies that have characterized Western thought.” (Gilbert, F. Scott, et. al.: A Symbiotic View of Life: We Have Never Been Individuals, 2012)

Ultimately, this intertwining and symbiosis are also indicated in the exhibited works. Right at the entrance to the exhibition hall, we witness the nascent dialogue between sculpture and drawing, from the black-and-white monochromaticity of the drawings through delicately colored accents of the sculptures, we are finally immersed in a colorful palette of paintings. Pairs and small groups of works gradually reveal their similarities, mirroring or complementing each other, while never losing their uniqueness. We can understand the exhibition Intertwining in its own way as a symbolic expression of the principle of coexistence, which is not only the theme of the works themselves, but also reflected in the gesture of sharing and invitation.