Just from the mere topics of many Tai Shani‘s works we can see how this artist fancies tragedy. Her current exhibition project called Tragodía (Greek expression for a theatrical piece with a serious content; literally song of the goats) is an explicit manifestation of this inclination of hers, yet it would be a mistake to reduce it just to this interpretational level. Tai Shani’s work is first of all full of contradictions or paradoxes: thematically we encounter motives such as death, violence or suicide, but in the same measure the topic of explicit sexuality and romance. The artist herself indulges in psychoanalysis, and so the dialectics of her works can be expressed as permeation of the productive instinct of life, Eros, and the destructive instinct of Death, Thanatos. 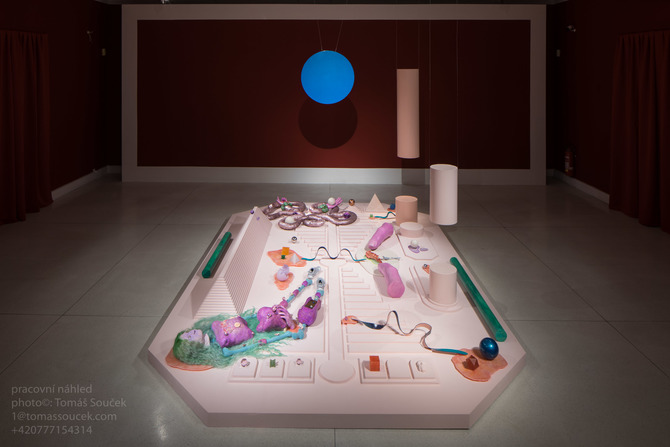 Shani works amid a broad spectrum of media, her main means of expression being performance, text, film, and object installations. This all together often forms an immersive, theatrical environment, attacking viewer’s senses and imagination. Her aesthetics connects sensuality, dreaminess and organicity of surrealism, postmodernist (architectural) pastiche and psychedelicity of club culture. Typical of Tai Shani is her relationship to the alternative music scene, and her subcultural references – typically documented by, among other things, her original visuals / posters, which accompany each and every of her projects. The resources the artist explores include antic tradition and mythology, literary and film classics, medieval stories, religions, sci-fi and popular culture. However, as Shani herself admits, a considerable part of her subject matters and partial motifs of her artworks are based on her own experience – not necessarily explicitly autobiographic.

Shani was born in the United Kingdom, but she grew up in an alternative left-oriented community in Israel. Her parents were members of a countercultural group The 3rd Eye lead by artist Jacques Katmor. The group declared revolutionary ideals and shared enthusiasm for altered states of consciousness under the influence of drugs, for loose sexual relationships and creative experiments. Tai Shani’s artistic career was thus practically given and as she herself says, she never had the need to tackle the issues of whether such way of life “makes sense”. The unorthodox (and in the given context of place and time even radical) environment that formed the artist in her childhood can thus lie one of possible keys to interpret her art. Undoubtedly the already mentioned psychoanalysis might be of use here as well. As Shani herself declares, artistic creation cannot be looked at just as a certain kind of therapy, yet it partially has this dimension.

In case of Tragodía, the prism of artist’s personal story readily lends itself as a clue to the artwork’s interpretation. Along with the central tragic-existential theme of death and loss, Tragodía arouses questions connected with the form of a (traditional) family, the role of women (wife and mother), relationships between women, mental balance or normality, psychoactive drugs use or individual freedom in general. Undoubtedly all these topics concern the artist in a very personal way.

The three women apparently represent her closest relations, mother and aunt, complemented by grandmother on mother’s side. Shani who is the last in this bloodline and one day her family will “die out in her on the distaff side”,[1] escalates tension ensuing from such awareness when choosing for her plot the death of a daughter and mourning of the bereaved that will end up with them all committing a voluntary suicide.

As if the artist reversed the roles – accelerating time and letting her older relatives experience this situation of a family coming to an end. As daughter she is thus releasing herself from the painful prospect of the day when she would be the only one left. At the same time we can suspect certain degree of self-identification in all characters presented. Thus the forthcoming inevitable drama is experienced in fictitious framework from more points of view. The time dimension is intriguing concerning the motif of child’s death: when a parent must burry his or her child, it is a kind of “fatal mistake” in time sequence – the parent finds herself further in the future than where she should be – as if she leaped over her own death. This aspect of Tragodía can be also perceived in connection with the author’s long-term interest in time overlapping, simultaneity, time travel or existence of more parallel universes. As mother and aunt reflect in their lament: „Open a million almost infinite worlds where you would have survived. […] Or terrible worlds, where you died many times in awful circumstances before this, or you were a stillborn. Or the worst of worlds where you were never born at all.“ What would happen if I were not born at all? A play of potentialities is present in Tai Shani’s work as one of its structural principles, thus imparting to it an existential and speculative dimension.

The spatial installation itself has a strikingly theatrical character of a spotlit “stage” full of fascinating “props” but without any sign of movement or life – the expected actors are gone… This unpopulated emptiness (though loaded with symbols at the same time) underpins the fatalistic meaning of the artwork. We then follow the virtual plot of the drama, which by contrast offers extreme details of the characters. We are confronted with the heroines’ expressive faces, which at the same time embody the taboo categories of old age and ugliness. Female (anti-) heroes and their relationships are after all yet another constant in the works of Tai Shani, who quite unequivocally declares roots of her art being feminist, at the same time however she is skeptical concerning the possibilities of contemporary art to be an agent of radical social changes.[2] In the first place she wishes to evoke an intense emotional experience, which would last in the viewer.[3]

The topic of death has of course a panhuman transferability, however the artist cares about just certain facets of this universal topic. Morbidity, which is not alien to Tai Shani, is rather marginal in Tragodía; the work’s main focus is directed towards psychological dimension of what death brings to the bereaved – separation, sorrow, memories, emptiness – reality, consequently unacceptable by many, as the aunt puts it: “I can’t understand a reality of never being reunited.” Through the presence of the spirit of the deceased, the play also touches upon the transcendental dimension of death and, as the dead daughter mentions: “Non-believers have to accept that the price for secular respite is that of eternal separation.”

In its message, Tragodía is moving, even heartbreaking, and yet not quite dark – leaving space especially for freedom (be it radical, i.e. freedom to finish one’s life), and referring to the bond of love, which endows our freedom with meaning.

[1] „I don’t have children. I won’t have children. I have a very strong bond with the women in my family. These people are all I have; there are no men in my family. My whole family line is now my mom, my aunt and I. That’s it. I have no siblings. I’ve got no one apart from these two really exceptional women that once they die, I have no bloodline. I have no cousins either as my aunt never had children. On my dad’s side, it’s more complex. My mom and my aunt are all that I have left and I think I’m already very anxious and horrified by the idea that they won’t be in the world anymore. I’m writing this film to maybe exorcise some of these feelings and obviously to delve into the nature of these very close, very intimate female relationships that I’m interested in.” – Rozhovor Laury Hensser s Tai Shani pro iheartwomen.co.uk, 2018.

[2] „All of the thinking and ideas behind the work are completely rooted within feminism. Is it an activist work? I can’t say. The art world is a very rarefied space and people that are part of the system are often privileged, including the women. It’s also a world that very few people outside of it interact with.“ – Ibidem.

[3] „When someone close to you dies there are these weird days afterwards that are quite psychedelic, you can still sense that person is still there. I remember when my dad died, I remember looking at the tree and the shaking of leaves and feeling a sense of his presence, like an animism, a diffusing of that person’s essence into the ether. It’s a weird thing. You have moments where you laugh, which are quickly followed by moments where you feel absolute devastation. It’s a mix of honouring and remembering that person. It’s like the impossibility of seeing a cigarette butt, which you know was smoked 24 hours earlier. It’s fascinating how objects continue to be in the world and remain possessed by the person that has now departed. I want to address these feelings of loss within the film.“ – Ibidem.