The Audience Has an Award

The Audience Award has been announced alongside Jindřich Chalupecký Award since 2002. The viewers vote online or in person at the venue of the final exhibition for the finalist whose work speaks to them the most. In collaboration with TIC Galleries, Jindřich Chalupecký Society presents a selection of the works by the Audience Award holders along with video interviews addressing the meaning and values of this award. However, the exhibition wants to go beyond the level of recapitulating the past; its main aim is to actively approach the present viewers and, using various strategies, make them strongly aware of themselves as essential actors in perceiving and creating the meaning of the individual artworks as well as of the exhibition as a whole. 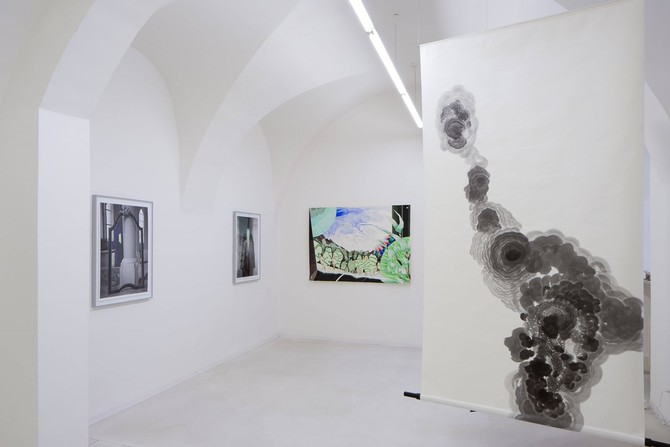 The institute of audience/readers/listeners awards has its place in all artistic disciplines; in the field of visual arts, there may not be a better opportunity for such a vote on the Czech art scene than in connection with Jindřich Chalupecký Award. The Audience Award has been announced along with Jindřich Chalupecký Award since 2002 (though irregularly in the first few years); first under the auspices of Reflex and Respekt magazines, and since 2015 under the auspices of the Czech Centers. The viewers vote online or in person at the venue of the final exhibition for the finalist whose work speaks to them the most.

We are convinced about the deep meaning of the Audience Award; not only because it is a way to activate the general audiences, enable them to be part of the events and voice their opinion but also because the decision of the viewers sends a message back to the art scene. The JCHA holder is selected by an international jury while the voice of the audience can be perceived as a certain counterpart of this internal decision. This is also proved by the fact that until now, the decision of the jury and the audience never met in the person of a single finalist.

Nevertheless, at the exhibition entitled The Audience Has an Award, we want to go beyond a mere recapitulation of the past. We have selected works by previous Audience Award holders from the past few years according to our personal interest and liking, taking a rather subjective and intuitive approach. One could say that our choice was rather that of viewers than that of experts.

Our main endeavor was to actively address and thematize the present viewers. Using various strategies, we tried to make the viewers strongly aware of themselves as essential actors in perceiving and creating the meaning of the individual artworks as well as of the exhibition as a whole. We wanted to ascertain how the use of sometimes explicit, sometimes rather subliminal interventions can affect the emotions and psychosomatics of the viewers and thus how an alienation effect can be achieved.

We respond by the possibility to choose among playlists (curated by music publicist Karel Veselý) that will accompany you throughout the exhibition according to your mood. We imbued the gallery with the scent of sweets so that the “neutral” gallery space has the olfactory qualities of a confectionary. While some may choose to stick around the gallery for a little longer, others may decide to leave earlier and grab something sweet on their way. The central part of the exhibition has become a space for relaxation and a place for at least a brief encounter with the exhibiting artists so that the “unbiased” perception of the artworks can have a personal touch. Before you even enter the gallery, you arrive in an unconventional waiting room where you can get ready for your role of the viewer. Finally, each exhibition visitor gets a symbolic reward that equals the former entrance fee to TIC Galleries.

Throughout the exhibition, a group of “engaged viewers” will meet at the gallery under the guidance of Isabela Grosseová and Jesper Alvaer. Members of the group were selected anonymously based on ads and get a fee for their participation. The activities of the group, whose aim is to develop the viewers’ competence and emancipation, will gradually become imprinted in the exhibition which will thus partially transform.

These curating interventions are meant to remain rather invisible though, since we do not want to make the impression that the works cannot work on their own and need to be “completed”. We believe that the exhibition works as a distinctive visual and spatial whole and everything that is there beyond the artworks works as a mirror in which the viewers can see themselves in the company of the exhibited artworks.