In a galaxy far, far away, in a biosphere once full of life, on a planet called Earth, in the beginning of the third millennium… the exuberant flora, the habitudes of the forest trees, the diverse hues of green in the fields, the colors of the extraordinary flowers of the gardens are almost fully lost in the hardly evocable memories of the past… These could be the first lines of the sci-fi dystopia inspired by Márk Martinkó’s photography series titled Artificial Green. 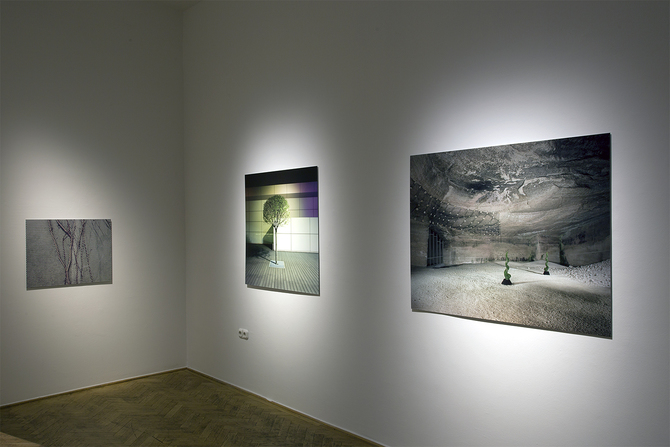 Márk Martinkó explores the disturbing relationship between man and nature while mapping the present day environment of the homo sapiens, who keeps exploiting the natural resources of the Earth, and increasingly expels nature and the natural habitats via his/her concrete buildings. The choice of the subject and the creation of images are supported by a comprehensive research, which includes choosing the spaces, designing and furnishing them, and also examining the medium of photography. Namely, photography, which is considered to be the rapporteur of objectivity and authenticity, now reveals a kind of visionary, gloomy future that builds on the experience of the present, and does not necessarily showcase a positive outlook. When looking at the individual images of the series – unfolding continuously for five years now, and already exhibited partially, created with a medium format camera on color negative film – it is difficult to decide where and how – if at all – the author meddled with the environment in order to achieve a specific visual result, which further increases the feeling of doubt and uncertainty.

The images of real and staged post-natural spaces, live and artificially created plants, reality and illusion are mixed in the series, in which the photographs that follow a consistent visual language do not become monotonous, not even due to the recurring elements, but rather, they appear as a coherent whole, presenting a manifold, thought-provoking idea in a complex way.   (Judit Gellér, curator)