The Amplifier of Dust

The title of Aleš Čermák’s exhibition The Amplifier of Dust can evoke technologies, sci-fi or surrealist poetry; such ambiguous or even cryptic nature is characteristic of Čermák’s work. The Liberec exhibition continues the artist’s research project commenced during his stay in London in the spring of 2017. In his film AiS&SiA, Čermák focuses on local socio-political-technological issues with a global overlap. In this case, it is the military use of drones and “asymmetric war”. The video, installed in the environment evoking the atmosphere of shoot-em-up computer games, is composed of collages of online found footage capturing the war conflicts in the Middle East, propaganda videos and DIY how-to-make-a-drone videos. However, rather than conducting a purely rational analysis of a particular phenomenon, Čermák is interested in broader structures and processes, whether these be the economic-political mechanisms of global capitalism, the formation of history and memory, the forms and tasks of imaging or technological progress in relation to the post-human development of the world. Besides the scenographically installed video, the exhibition further includes an authorial newspaper in two language versions, presenting texts contextualizing Čermák’s thought which has absorbed the impulses of science, philosophy and poetry. 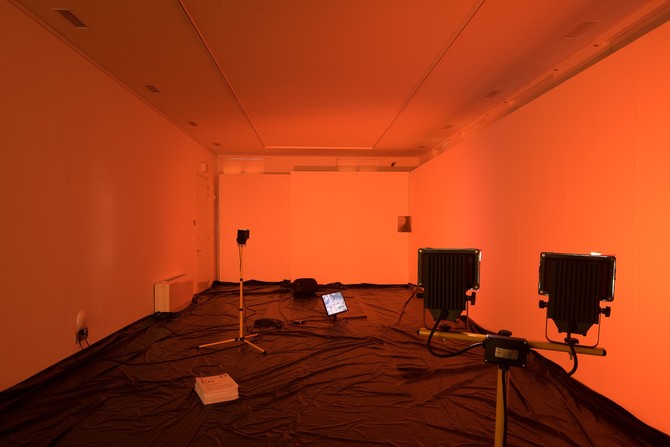 The tautological title of Aleš Čermák’s video Ais&Sia, which is an acronym of the words asymmetry and strategy, inevitably refers to the phenomenon of asymmetric warfare. This relatively new term is currently associated primarily with the conflicts in the Near East and Africa. A simple definition on Wikipedia says that the term denotes a war between belligerents whose relative military power differs significantly, or whose strategy or tactics differ significantly. However, if we look deeper into history, we can trace similar cases of asymmetry; most significantly that of subjugating the indigenous population in colonial territories. Asymmetric engagement is thus deeply rooted in the dominance of “more advanced” cultures and many of today’s asymmetric war conflicts grow out of a ground that has been developing for decades and centuries. One of the key factors of asymmetry is technology (which, in the broadest sense, can be seen for instance in the relation between a bow and an arrow vs. a gun). As a prognosis on Wikipedia says, “The revolution in military technology when informatics and telematics have become part of combat; the way military data are processed; the use of advanced weapons enabling to fight with inconceivable precision even in adverse conditions, for instance at night or remotely; the application of information technology on weapon development; all these have contributed to wars becoming increasingly asymmetric.” Asymmetry as a strategy is thus more and more inevitable.

The central motif of the video collage Ais&Sia and of Čermák’s eponymous text is the drone as a militarized instrument. The drone (the word itself can give one goose bumps) is perceived as a kind of magic, a magic formula. Unseen, it strikes the target like God’s fist, a bolt from the blue. According to Čermák, in connection with stuffed drones that play the role of carriers and droppers of grenades and bombs, we are confronted with an ambivalence of sophistication and primitivism. DIY videos along with recordings of drones in direct action in Syria and Iraq show how easy it is to construct the murderous machine. However, as military analyst Nick Waters says, drones (paradoxically) introduce an ethical dimension into combat due to their precision thanks to which the designated target can be hit more efficiently without secondary losses. “The world is suddenly somehow rough and at the same time brilliantly sophisticated.”

Nevertheless, Čermák’s video and texts (which, too, can be perceived as asymmetric in a sense, as they will probably always be impenetrable to those coming from the outside to a certain degree) are not unreservedly about a rational analysis of a single particular phenomenon. The artist is interested in broader structures and processes; be they economic-political mechanisms of global capitalism, the construction of history and memory, the forms and tasks of representation or the technological progress related to the post-human development of the world. “The end of the world must not necessarily mean the end of the world but merely the end of us.” This is not a pleasant notion to most of us; however, as Čermák writes in another text, transformation goes through man, precedes the human and thus can also surpass man as well. Transformation is thus natural and we are its part, not necessarily its mover and regulator. In the future, transformation will inevitably bring new forms of asymmetry; for instance between the body and the artificial neural network. Who knows.