“We move together in the environment of the gallery and the school. A third place where you can find us is a garden, a forest, a park. We could talk for ages about mother nature, from which we should learn, and Michel Serres says this is even an imperative. Yeah well, but what is it, the nature from which we should learn nowadays. Is it the one modified by humans and their never-ending work, or some idea of its virgin predecessor? It’s as if we should begin to learn again, forget what we know and study at the same time. Schools and monasteries used to have their own gardens, and Prague botanical garden and its past is connected with schooling as well. However, more and more we escape into gardens for health and rest. Gardens, fruits, seeds or invasive species of plants currently serve as symbolic images and cultural studies of migrating and settled society. Nurturing and education can easily pose either amazing results and profits or predisposed and care dependent individuals. That is why we are simply venturing out and leave many other symbolic meanings of education and cultivation to those who want to search for them in the gallery.” - Edith Jeřábková 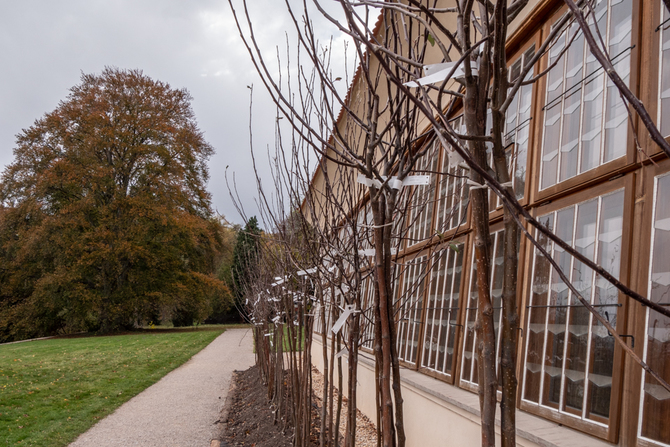 Edith Jeřábková, Dominik Lang a Jan Haubelt have been running the Sculpture Studio at the Academy of Arts, Architecture & Design in Prague for 7. In the year 2017, together with twenty-five students from their own studio and from the partner Photography Studio of Josephine Pryde (AdBK Berlin) they purchased a small property which currently serves as a refuge for endangered badgers. However, the essence of this long-term project is the visibility of the collective as a key aspect of the pedagogical approach of the current heads of the Sculpture Studio. The collective ownership binds the assemble of people for the future as well, transcends bonds provided by friendship or shared interest in art and gives these ties a new form, which also reveals possible difficulties of the collective responsibility. It is precisely the awareness of the shared responsibility and empathy towards others which are the qualities which Jeřábková, Lang and Haubelt are trying to cultivate in their department in the long term. In their own words, it is precisely the collective consciousness which helps build strong characters who are confident in their individual artistic practice, but at the same time they remain sensitive towards the whole – being it their colleagues in the studio, in the artistic sphere or in the society in general.
Another collaborative project, once again a collaboration with the Berlin Studio of Josephine Pryde, was the release of a book Season Five. The book launch was joint with the opening of an exhibition in the Entrance gallery. The book is a result of a semester project which dealt with the themes of sharing and ownership of land.
The exhibition project Test with Spade is a natural follow-up of the present interests and principles that are being cultivated by the Sculpture Studio. Simultaneously, it is a response to the framework given by this year’s dramaturgy of the Entrance gallery, focusing on young pedagogues of art academies. The trio of the current heads of the Sculpture Studio did not want to present their own work in the gallery, but rather to refer to the aspects that connect them with the students. That is why in the very beginning, they have consulted the invitation to the exhibit with the students, who helped them compose the final look. The central motives of the collective exhibition (which reaches out not only geographically beyond the walls of the gallery and the monastery, but potentially even way past the duration of the exhibit) have then become the community and also nature (which is the subject of interest of all participants), or more precisely the outside – a space out of the gallery, out of school, a space outside, the public space.
The interior of the gallery was used as a technical ground, whereas the space in front of it sheltered almost a hundred of fruit trees, which will be gradually taken by the students and graduates who will plant them in public spaces of Prague according to instructions. The project on its participative level reaches out into land-art or the reminiscence of historical examples of planting trees as an artistic act and it creates a network of bonds and links to the art of past as well as the current discourse represented by community projects and even international art shows. At the same time, it has the potential to generate a rich spectrum of metaphorical meanings thanks to the elements that can symbolically resonate even with the public – a tree, an apple tree, planting, growth, the bearing of fruits, time, care… According to Dominik Lang, this project is mainly about certain authenticity, about what will really happen. What is being born here is the soil for the experiencing of belonging, responsibility, continuity; at the same time what also arises is an actual, tangible, live reality in the form of trees which can grow past the framework given by this project and become a part of the ecosystem of people and other living organisms.