Ella Littwitz’s exhibition And Waters Became Wormwood is the first presentation of the work of an Israeli artist in Poland, organized in cooperation with the Brussels gallery Harlan Levey Projects. The works are the result of Littwitz’s research in the Mediterranean Sea Basin – its past, present, and future. The artist focuses on the issues of human migration and nationalism in this area. Littwitz interweaves different elements such as religion, science, and geopolitics. The end vision of “The Mediterranean” might be quite far from this what is superficially known. In Littwitz’s works, the Mediterranean Sea shows a dual character, which both connects and divides. It is a bridge and at the same time a barrier between the Global South and the Global North.
Ella Littwitz lives and works in Israel. Her artistic interests include archeology, history, botany, culture, and politics. In her research, she focuses on archives and their creative potential. She graduated from the Higher Institute of Fine Arts in Ghent, Belgium and Bezalel Academy of Arts and Design in Jerusalem, Israel. Littwitz has exhibited in solo and collective exhibitions in Israel, Europe, and the United States. 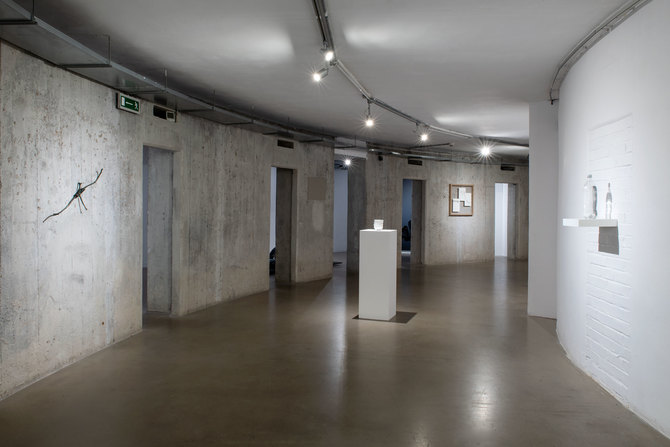 The Mediterranean is commonly perceived as the cradle of European culture and civilization. It is not, however, only the mythical land of the sun where philosophy and poetry were born, but rather a dynamic place which is constantly in flux. Predrag Matvejević defines the Mediterranean Sea as a tense and contradictory “amphitheater” filled with an endless dispute on contradictory values. This seems especially crucial in light of the ongoing migrant crisis, as the Mediterranean Sea has become a bloody stage and a place of fulfilled apocalyptic prophecies. According to The Book of Revelation, the waters shall become wormwood, which in the Bible is associated with misery, bitterness, and the destruction of the human race. Are we currently facing the end of the beautiful Mediterranean myth and the end of the European civilization?

Littwitz addresses these problems using well-known symbols taken from the Mediterranean world to build new narratives. The artist interweaves different elements such as religion, science, and geopolitics. The end vision of “The Mediterranean” might be quite far from this what is superficially known. It reflects the historical and archeological time of the region, its complicated present, and unclear past. In Littwitz’s works, the Mediterranean Sea shows a dual character, which both connects and divides. It is a bridge and at the same time a barrier between the Global South and the Global North.

The utopian concept of German architect, Herman Sörgel, constitutes a particular reference point for the exhibition. Created around 1920, Sörgel’s unrealized idea  envisioned a huge dam separating the Mediterranean from the Atlantic. The sea, deprived of the water inflow from the ocean, would gradually dry out. This plan aimed to unite Europe and Africa, eventually creating one big continent called Atlantropia. Paradoxically, one of the elements of Sörgel’s project was a bridge connecting Tunisia with Sicily. This same route Sörgel mapped out for his bridge; it is currently the deadliest stretch of sea separating the two continents, the one refugees use to cross the Mediterranean.