“[… man] perceives reality as something that, being outside of him, is primarily against him; it is something foreign, unknown, existing in itself; it is his boundary and thus his negation. However, since it is his negation, it also forces him to be aware of himself: in this way, reality gives birth to artistic creation. Art always commences in a sudden touch with reality that is outside the rational system, is disjointed from it, and thus lays bare the sensibility of the spirit and mobilizes its forces trying to get hold of reality. Art’s theme is always non-cognition, loss of orientation, an attempt at a new one. At the same time, it forces man to perceive himself. No matter where he starts, as soon as he becomes aware of the disjunction of existence into self and it, man and universe, both will become manifest in their true monumentality. Thus things are more than a delimitation and negation of the subject; they are a prerequisite and a constitutive part of consciousness.” – Jindřich Chalupecký: The World We Live In (1940) 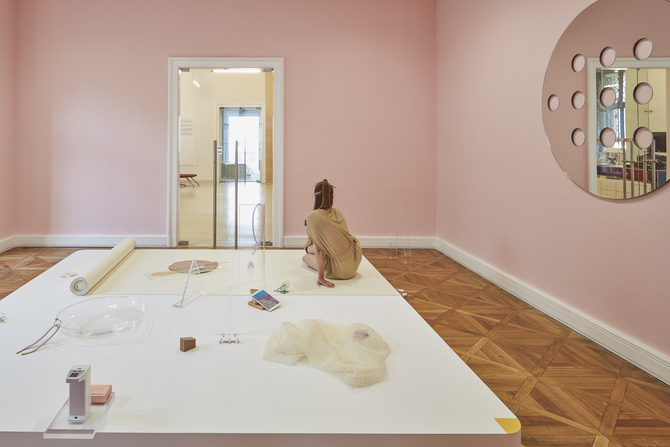 The World We Live in?

The exhibition of five finalists of Jindřich Chalupecký Award has its specifics: from the perspective of the curator, it is an ambivalent affair – the curator selects neither the exhibiting artists nor the exhibited works, nor does he or she define the main theme or concept of the exhibition. In a way, his or her task rather corresponds to the traditional meaning of the word curator (from Lat. curare, i.e. to take care, to look after) – the one who looks after museum collections. In this case, however, the curator looks after the exhibiting artists and tries to be helpful during the conception and production of the resulting works. The contemporary curator’s ambition to create a coherent and mutually interconnected whole through the exhibition is thus naturally left aside. The five independent creative subjects work freely on their own new projects without having to take into consideration what the other finalists are working on. That may result in five completely different presentations that work as a series of separate exhibitions rather than a single common one. Moreover, in its nature, it still a competition in which each finalist stands on their own and it is up to the curators and organizers to provide equal support, means and space to all of them. All that results in the fact that the final of Jindřich Chalupecký Award cannot be ultimately perceived as a solo exhibition in the strong sense of the word. And yet: to create a more complex framework, the curator has one more tool at their disposal – the accompanying text.

When building an interpretative umbrella construction for this particular exhibition, one can symbolically draw on the excerpt from one of Jindřich Chalupecký’s most cited texts: The World We Live in. According to Chalupecký, art is based on the clash between man and reality, the latter being independent from man’s own existence, external to man. While such a claim does not necessarily have to be accepted as universal, it is still true about the five exhibited final projects. The relation between man and the surrounding reality is addressed in various ways by all of this year’s finalists and it can thus be labelled as the proverbial red thread interconnecting the individual parts of the exhibition.

It is noticeable already on the level of presentation and the ways in which all five installations relate to the viewers and their physical presence. Even in case of the most “traditional” medium, the paintings by Viktorie Valocká supplemented with objects in space, the artist invites us to enter “her work” and get seated in one of the sofas covered in painting by the artist. Rather than receiving the aura of the large-sized canvases on the walls from a distance, we are enabled to relax, stop for a moment and perhaps perceive the works differently thanks to that. The other finalists, too, have opted for similar strategies: we can watch Martin Kohout’s film half sitting, half lying; Dominik Gajarský has used comfortable garden deckchairs; in the installations of Romana Drdová and Richard Loskot, we can sit down as well. The artists conceive their installations in a more or less complex way as compact environments with their own atmosphere. We are reminded of our corporeality and thus of the immediate experience of here and now by the touch and surface of objects, the possibility of seeing ourselves in a mirror reflection or as part of a video recording, as well as through the activation of the sense of smell, which is not usually involved in exhibitions. One can thus say that the strategy of all finalists is to put the viewers in a situation in which they can identify themselves in touch with what surrounds them in a more tangible way than in the position of a distanced observer.

The relation between man and his environment, the world and the things in it is present in the exhibition of the finalists not only on the level of form and presentation strategies but also on the level of content and meaning of the individual works. What is characteristic for the capturing of this relation in all cases is the moment of the absence of man and the emphasis on human existence in a broader context achieved through this very absence. As Chalupecký put it: the reality of the world and things is a negation of us as a subject; which, however, leads to self-awareness. With the exception of a video by Romana Drdová and a film by Martin Kohout, all of the exhibited works lack the human figure. Even in Kohout’s case, we observe situations that are characterized by a relative absence of one person in relation to the other; whereas Drdová shows the body as a mere fragment, or object. At the same time, however, it is symptomatic that even if the human figure is lacking altogether, we are still confronted with inherently human attributes – culture, technology, religion, products etc.

Gajarský and Valocká prefer to depict animals and plants rather than people, however, they put them in a close relation to our civilization. Besides vanishing dolphins (who might be, with a little exaggeration, perceived as a memento of our ambivalent relation to nature and to the necessity of its protection), Valocká also captures a place that is revered and governed by strict rules when it comes to tourist visits but can be characterized by a certain loneliness as well. According to the artist, the cheap rendition of the architectonic elements in the Bahá’í Gardens of Haifa corresponds to the peculiar tradition of this religious teaching while the realistic rendition of the view of the garden raises the metaphorical question of the criteria of authenticity. Gajarský, on the other hand, employs allusions to the genre of the traditional fable while also seeking inspiration in articles and images spread online. Snakes hiding under the hood of a car and a lonely goose looking at its reflection in a car’s body; both are based on real stories illustrating the contact of wild and domesticated animals and human conveniences.

The works by Valocká and Gajarský are imbued with a sense of certain absurdity and contradiction in today’s world. In the film by Martin Kohout, we are both humorously and urgently confronted with bizarre situations straddled between the present and the future: “thieves” who only hunt for selfies in other peoples’ apartments; businessmen who change the products in their shops at the whim of the market on a daily basis; transport companies that control and impose a charge on the efficiency of movement of passengers in the subway. All of these strange and somewhat disturbing situations have a basis in today’s world, in the current technologies and systems; we cannot rule out for sure that that they would develop in a similar way.

Drdová and Loskot create environments in their installations that are familiar on the one hand while being strangely depersonalized and empty on the other hand. The objects of Romana Drdová draw on the urban context and besides an attractive design and seductive materials, they are characterized by a certain sterility. They potentially show the unified aesthetics of the perfect product of tomorrow. The two-room fragment of an apartment rendered by Richard Loskot is some kind of a desolate imitation of a home that is only inhabited by artificial intelligence supplemented with simulations of other life forms.

In summary, all the final projects are a reflection of the world we live in, and partly an allusion to a world we do not live in yet but whose foundations we are laying already today. The attention of the artists does not focus on man and his subjectivity but rather on what surrounds him, whether it be “natural” nature or the products of civilization. As Chalupecký puts it, things are a prerequisite for the constitution of consciousness and therefore they bring us back to ourselves. Chalupecký’s thought is deeply rooted in phenomenology and existentialism, and since the sworn defender of modern art was also a great humanist, man as a subject, or human life as such, was consequently always the pivot of his reflections. In conclusion, let us try – with regard to the current intellectual tendencies in philosophy and art that try to reevaluate the superiority of the subject over the object and thus disturb our anthropocentric perspective – to read this interpretation of the final exhibition against the grain: the absence of man, or a greater emphasis on “things” and generally mechanisms and processes that are external to the subject, do not necessarily bring us back to man and to the world in which man lives or will live; on the contrary, it can lead to a reflection on a world in which we (as mankind) do not live and which is still turning around. Such a vision does not necessarily have to take on post-apocalyptic contours; all we have to do is supplement Chalupecký’s proposition of the disjunction of existence to self and world with an awareness of the fact that self is not in the center of all that. To paraphrase one of the exhibited works, we can ask: How well do dolphins know us?