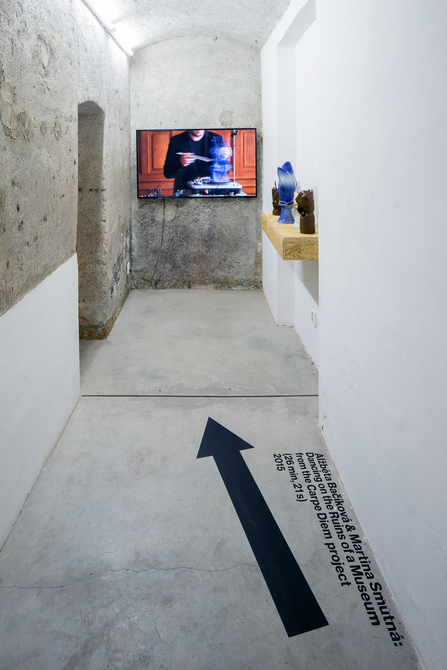 The idea for the exhibition Ripple Effect originates from a curatorial attempt to research and re-evaluate young artists’ applications for this year’s edition of Jindřich Chalupecký Award. To begin with, we have cast an alternative gaze on hundreds of works by over ninety artists that usually remain hidden behind the regular jury process, where only the selected few receive particular attention with a single ‘winner’. However, the resulting exhibition is by no means a ‘salon of the refused’. Instead of weighting quantities, we structured the project around three semantic points, emphasizing the notions of gratification, speculation and temperament. Three works by three internationally recognized artists Darren Bader, Carey Young and Egill Sæbjörnsson are positioned as precursors of the intrinsic inquiries of the exhibition that open up and expand to include works by young artists active on the Czech art scene. The exhibition title suggests a system of relationships, where a single drop may cause effects much larger than the initial insertion. Works by the international artists serve as such thematic drops, initiating dialogues related to the symbolic value of art, its judgment and categorization, the politics of the art world establishment, as well as self-awareness and self-reflection of the artists and their works placed within such structures.

The exhibition starts with a conventional White Cube style display of works that are placed in differing vicinities to one another, connected by an overlying thread set forward by Carey Young. Young’s textual piece Positive Buzz (2001) is placed on a singular wall and across the exhibition space, initiating conversational relationships. The sculptural installation informed by works of Anna Ročňová, Antonín Jirát, Břetislav Malý, Monika Žáková and Václav Kopecký is further complemented by singular statements of Positive Buzz, where Young worked with the published advice of London-based business consultants, who suggest to use such phrases to generate new ideas in corporate brainstorming sessions. The dialogue that emerges between these statements and the other artworks on display then posits towards the fluctuating situations of judgment, objectification, encouragement and humorous encounter, adding on another semantic layer to the composite.

The second phase of the exhibition ripples around Darren Bader’s animated video The Vagrant (2015) which fables a situation of the last general assembly of the United Nations. While the UN proves as no longer effective means of governance, it comes to an end with a last project in mind, to be selected from proposals received from all member countries. Republic of Chile wins the lottery with a proposition suggesting a global competition for sculptures to be sent to outer space. It quickly gains tremendous popularity and anxious objects begin to enter the universe in a centuries-long quest. The work is not only an ironic commentary on the international mechanisms of the art world, but also overlaps with the challenges and miseries of the present moment in general, marked by both skepticism and remaining hope to overcome the environmental, political and humanitarian apocalypses that are knocking at the door. Entering a dialogue with Bader's cosmic adventures, works by Anežka Hošková and Jakub Tajovský propose physical and symbolic reinterpretations of ritualistic attributes, questioning their present social relevance within the boundaries of their institutional display. Barbora Fastrová and Johana Pošová contribute to the narrative with what might be a post-apocalyptic memorial for natural wonders. The video installation by Alžběta Bačíková and Martina Smutná expands the approach towards institutional critique, where the context of a museum in a process of being cleared out for reconstruction transforms the value and purpose of artifacts.

Egill Sæbjörnsson’s piece The Egg or the Hen, Us or Them (2011) charges the exhibition with a different density. In a slightly surreal ontology, animated stones engage in conversations about their personal value and stances as well as their possible perception by their respective observers. Sæbjörnsson pronounces the undercurrents of relationships with the self and others, whether those refer to an object or a person. Such notions are expanded by the works of Aleš Zapletal, Filip Dvořák, Tomáš Kajánek and Tomáš Roubal. The playful attitude of all the works in this phase of the exhibition not only looks at the self and the relationship with the surrounding environment, but also provides a mirroring through representation, imagination and romanticisation of the artistic gesture as a defining component of the creative act.

Ripple Effect is a conglomeration of forces that are inherent in the processes of creativity and artistic endeavor; through looking at and bringing forward the current concerns that not only concentrate on the ontology of the artist, but also the spectrum of relationships that play a crucial role in the processes of artistic production. Ripple Effect, hence, is a portrayal of semantic links that are at play, and a subjective study of the young Czech scene whilst drawing in inspirations and influences from an international discursive context.