Mark Fridvalszki: Please mother, can’t we go some place where there isn’t any sky? 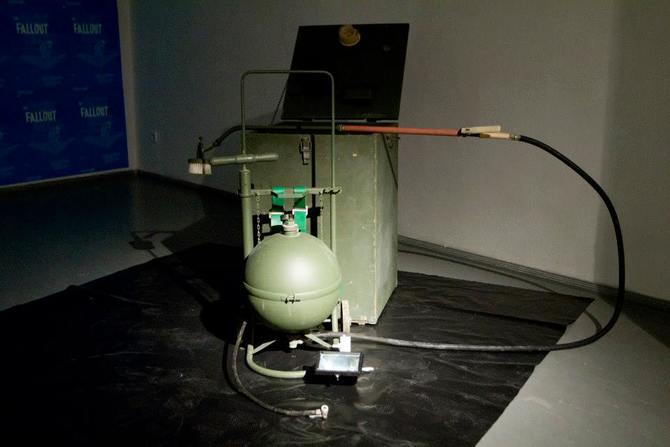 Bunker systems serve to protect and survive. Their memory brings to our mind the Cold War paranoia and it’s emblematic image: a trembling finger placed on a red button, ready to light the world on fire. The little American boy quoted in the exhibition’s title willingly asks his mother for a place unfriendly, claustrophobic and dark, that saves him from the uncanny buzzing approaching from the sky. Bunkers are described as prisons, crypts, graves, or at the very least asylum, as an ambivalent medium removing us from reality, space and time. For shorter or longer we are kept aloof from everything left on the surface.

Being 25 years after Transition, it became clear that neither decontamination equipment, nor residential air-raid shelters provide the necessary protection from mankind`s destructive force. Nevertheless, artists, theorists as well as tourists show recent interest for the manifold entity of these post-war structures. The bunker is approached not merely as an historical artifact but as a spatial metaphor for the current anxieties of controlled and directed societies.

Mark Fridvalszki’s space-specific and multimedia installation conjures the shelters built against WMDs (weapons of mass destruction), nostalgically reflecting upon the graphic, material and intellectual culture of the Cold War period. As its point of origin, this subject can be traced back to his earlier works, however it will gain a new formulation for the upcoming display at LABOR Budapest. The artist breaks with the flat system of the panel and creates an environment filling the whole space. Latter is accomplished together with Zoltan Solomon’s sonic space-interpretation, a life-act, to be performed at the exhibition’s opening, adding a new dimension to the presentation and the intended bunker-atmosphere.

The day after the opening, on April 18th Dr. Csaba Békés, founding director of the Cold War History Reseach Center will share with us the aims and achievements of the institute. What latest questions occupy researchers nowadays when looking at the Cold War Period? How do new information modify eventual misconceptions? And how does the media propaganda quoted in the exhibition relate to political reality? While Mark Fridvalszki’s installation looks at past events from an emotional and artistic point of view, the Cold War History Research Center presents its scientific backgrounds.