The Thunder Lizard Was Never Extinct 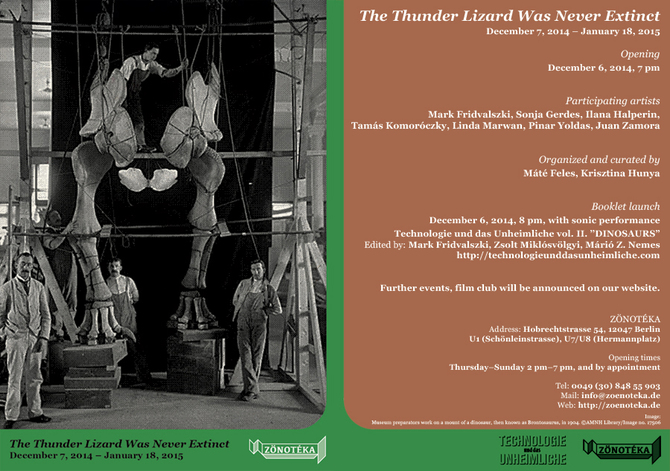 On February 16, 1905, the American Museum for Natural History (AMNH) opened its gates with something to become their greatest success ever before: a life scale mounted skeleton of Brontosaurus (‘thunder lizard’). While New York’s high society gathered around the new “dinosaur hall”, curators answered questions, and their wives served tea, a great excitement for the new star exhibit arose. Visitors described it as a “transcendent experience”, the imagination of a “terrestrial titan”, and a child wondered about how many of him could fit in his mouth, anticipating decades of increasing sauropod-mania. Accompanied with painted and sculpted visualizations, as well as a vague idea about the behavior of the reptile (sic!), AMNH created the first fossil incarnation of a giant dinosaur, an actual fantasy of how life on earth must have looked like ages ago.
However, as technology evolved it became clear, that the Brontosaurus never really existed. The presentation was a mere misinterpretation and can be regarded a relict from the ‘Bone Wars’, a feud between paleontologist Othniel Charles Marsh and Edward Drinker Cope in the late 19th century when naming new species dominated over methodical carefulness and scientific accuracy. Only few parts of the skeleton consisted of fossils from one specimen; other parts were completed and speculatively shaped with bones from further animals and plaster elements.
One can speak of a collage, a mixed-media installation that blurs the borders of science and vision, a scientific achievement or a sheer imagination, an accurate sense of dinosaur osteology or an ambitious spectacular for public success.
ZÖNOTÉKA takes the “Brontosaurus-lie” as a reference and framework for a group show displaying artworks that create likely visions of post and prehuman species. Latest scientific evidence, extensive field research, and an anthropocene perception of our geological age are pared with an eagerness to show or envision the secrets of possible life forms. Extinction and birth are viewed on an endless timescale, thus history and future, as we know it today, is continuously challenged.
Visitors of the exhibition are once again invited for tea while gazing upon speculative, uncanny as well as strikingly astonishing artistic visions.

In THE RIGHT WAY, the artists appear as rat and bear and go hiking in the open, as-it-were unspoiled countryside, at the mercy of the elements and all kinds of miracles - and, above all, at the mercy of themselves. With pure hearts and loads of goodwill, they try to find reasons for all they see and experience. Spontaneously they sometimes find themselves getting closer than expected to the right way.