At first glance it might seem that Isabela Grosseová’s exhibition titled Průraz/Break through is some kind of homage to the technique of lithography and at the same time the artist’s coming to terms with the fact that she is undertaking her doctoral studies at AVU (Academy of Fine Arts) in the Print making Studio. Both are true in a way.
Nineteen smoothed lithographic stones of different sizes are carefully embedded in the wall that divides the gallery space and forms an ostentatious monument to lithography. At a closer look or when passing through the wall, one can appreciate the beauty of these plates, made from a special kind of fine‑grained lime stone, as well as their weight, which shows itself in its physicality but also symbolically – as the weight of the centuries in which the method of printing from stone was used, long before our time (and contemporary digital technologies).
Also the video projection and the voice of the narrator focus on the lithographic stone itself, on its specific qualities and its own inner structure. Through the narrative we learn the story of a person’s fascination by this technique. 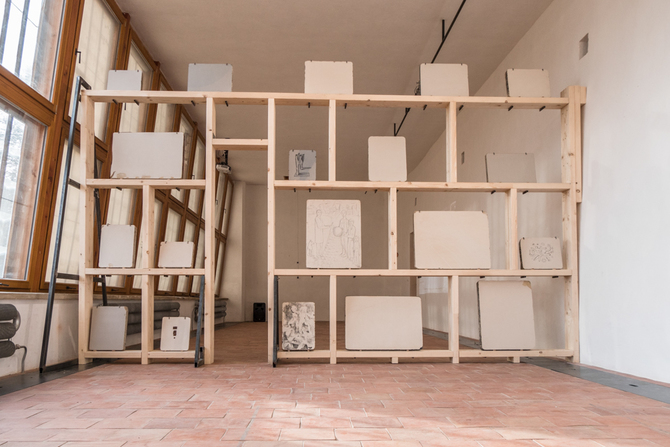 In spite of it all, lithography is for Isabela Grosseová first and foremost a metaphorical tool for expressing something different. Something more layered and complicated than a simple admiration for a sophisticated medium and its own charm.

Isabela, in her dissertation called Gravitace umělecké kompetence/The Gravity of Artistic Competence, focuses on the abilities, ways of thinking and of expression, and attitudes to viewing the world that emerge during the process of artistic training. However, she studies these competences in the process of their transfer from the “world of art” to the non‑artistic world.

The group of several dozen respondents, whose personal statements Isabela analyses in her work, consists of men and women mostly of retirement age who had received university artistic training but for various reasons either permanently or temporarily diverted from their own creative activity in the course of their life. But according to Grosseová, they carry certain competences over to the other areas of their work and life.

The current exhibition at the Entrance gallery follows the outputs of Isabela’s doctorate studies so far; most notably the project Vůbec mě nezajímaly výstavy/I Was Not at All Interested in Exhibitions which took place a year ago at the Gallery of the Academy of Fine Arts. The carrier of meaning and subject of interpretation were in this case the verbal statements of the involved respondents, and the whole project had a decidedly procedural character.

On this occasion, the artist again aims to use the exhibition medium to establish a gradual process in which selected respondents are given space for expression. This time, however, they do not express themselves through words, but rather through a graphic “language”. The nineteen stones, which are perfectly smooth and spotless at the start of the exhibition, are prepared for the participants of several workshops that will take place in the course of the exhibition. To be created on the stones are drawings representing the thought processes that the participants, cooperating with Isabela, will decide to represent – topics such as the distance between expectation and lived reality; where in life it is possible to use the sensibility and perception characteristic of artistic work, and where there may not be place for it; or visualizing what makes an artist work, where their motivation springs from. And in some radical instances also a relation to the issue of acquiring artistic competences on the one hand, and abandoning fine arts on the other hand. The topics in their essence also open up a relevant discussion about creativity, emotions, material and immaterial work, or precariat, and they point to the level of relations in the dichotomies between productive/non‑productive, useful /of no use, artistic/non‑artistic, valuable/valueless. But in principle this always concerns an experience that draws attention to the potential of artistic thinking in the hands of those who work with it.

Made‑up, yet inspired by reality, the story that can be heard at the gallery is a return to a time when a nameless woman devoted all her energy to the creation of lithographs. Lithographic stone is fascinating because of the great number of prints that can be made from it. Great precision is needed when preparing the lithographic plate – the drawing is preserved for printing, but everything around is closed off from the printing ink. On the background of a student passion for this technique, there also emerges a depiction of an unfulfilled journey that was begun with great vigour but then abandoned. This graduate did not “break through” in the world of art.

It is the relativity of success/failure, and the role of art schools in forming the criteria by which it is to be judged, that has been a long‑term interest of Isabela Grosseová. As she herself says: “By definition, the usual description of whether or not an artist is recognized suggests that there is a radical break from one way of being into another, similar to the two ends of a tunnel finally meeting in the middle, in a way that is a celebration of successful effort and great planning. But in the case of artistic success, it is in fact rather a complicated journey, accompanied by constant doubts and an effort to maintain one’s independence. The semi‑permeable wall installed in the gallery is used as a model that helps one realize what making some important decisions meant in the lives of now older graduates of the Academy of Fine Arts in Prague. What had to be suppressed, what competence could be utilized further, and what consequences it had.”