Imagine a delicate dark-haired girl with observant eyes and energetic demeanour; she is sitting in a café in a late afternoon with a man who makes a living as a professional ladies’ companion. The girl speaks standard Czech which suggests she is not from Prague and she is explaining the details about a planned shooting to the man involved.
Sooner or later, you can imagine another scene: the same delicate girl is standing in front of a camera in some other man’s flat. She is filming him sitting over a computer reading articles, watching sport, movies or porn. Her smile is honest and yet not far from a hint of irony… 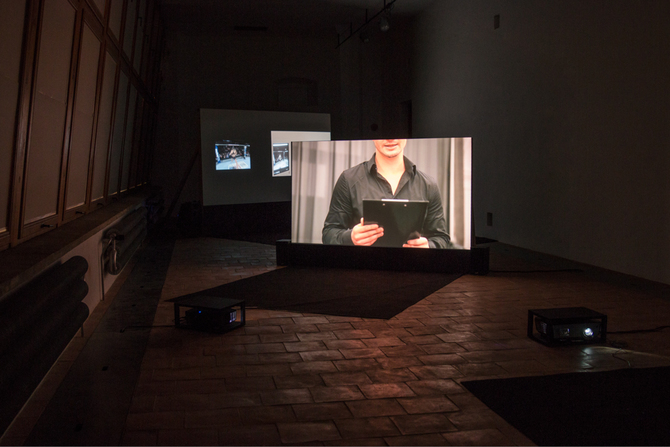 These fantasies are not real but they are based on reality. This is what Alžběta Bačíková
looks like when she works. Alžběta is currently a PhD student at the Faculty of Fine Arts in Brno. In her work, she focuses on exploring documentary approaches in contemporary art, mainly in the media of moving image. She is particularly interested in impartiality of the genre. However, she does not approach the theme merely on a theoretical level; she tries to transfer her conclusions into practice.

In her exhibition Running Report, Alžběta presents three videos that were recently exhibited elsewhere. She created a new compact whole for Entrance Gallery exhibition: the author cut them in such a manner that the footage of the three videos is the same and she adjusted them into a synchronized three-projection. The sound of each video is adjusted as well: only one soundtrack is always dominant (in full volume including a voiceover) while the other two complete the sound with noise or music as a background. In the case of Korespondence (Correspondence, one-channel video, 2016), the cut changes are radical with one scene and few shots having been added so the result is substantially different from the premiere last year at the exhibition Language at Hraničář Gallery in Ústí nad Labem.
All three videos relate to a documentary portrait genre. We meet with one protagonist in each of them: in Korespondence, it is a gigolo called Oliver, in a two-channel video Hrdinové (Heroes, 2017) we meet an Asian martial arts fan, Eda, and in the three-channel video Lékaři (Doctors, 2016), we are confronted by a nameless paranoid individual. The female artist, however, disrupts ‘the rules’ in many ways. The most striking is the absence of context. We never learn from the videos who are the portrayed people and why were they chosen for the documentaries; it is not clear where and when were the videos shot and what was their source. Alžběta demonstrates by cut and on the level of image and sound a complicated construction of the moving image as a whole that is never merely a reflection of reality. In the case of Lékaři, Alžběta reserved one channel only for a footage of the origin of music and sound on the background; while on the second channel, we can see a narrator in the sound studio. In Korespondence, an email communication between the author and the protagonist invaded the video. On many levels, these added “the alienation effect” to the work.

Alžběta’s strategy of testing the documentary format is not limited to a mere making the producing ‘apparatus’ visible. The content of the videos is also built on layered tension between the reality and fiction and their intertwining. Eda’s interest in Chinese culture on one hand and his literary ambition on the other, uncover in front of us through a reading of his short story. He found an inspiration for his story in a real historic figure and wrote it based on Alžběta’s impulse since she was the director. The home footages used in Lékaři are so absurd that we gain a feeling the scenes were staged; while in fact a genuine footage was used. In Korespondence, there are often images suggesting a meaningful connection with the portrayed Oliver (driving, party, night at the beach) but these images actually come from Alžběta’s archive. As a whole, the three ‘documentaries’ lead us to the question what is authentic and original, i.e. real, and what has been manipulated or added additionally. At the same time, the work shows that you can also create an image of a person non-directly and that this method can be even more complex.

Alžběta’s work offers a vast field for formal analysis and we could indulge in the interpretation in a more complex manner than the format of an accompanying text for an exhibition allows us. But what are we to do with the content of the videos, with their topic? The mere fact that we are confronted by portraits of three men should not elude our attention. Eda’s portrait in which he confesses about his hobbies in a factory environment where he works is probably the most detailed one. It shows a rather eccentric but sympathetic man (thus we can identify with him); moreover, we can observe here the well-known contrast between the work and the private. Gigolo Oliver who can allegedly satisfy the needs of both intellectual and physical substance appears to be an example of a super-man everyone dreams of; and yet he seems a caricature of self-objectivization. An unknown man suffering from persecution complex blaming his surroundings of sophisticated conspiracies represents the irrational and raging side of human nature. We could almost use the Freudian concept of ego, superego and id when analysing these three characters. If so, it might seem that Alžběta constructs a sort of a general metaphor of human kind by using the example of the three male ‘heroes’. However, Alžběta does not use such a patriarchal model (three men as representatives of the human kind) without critical reflection. I am convinced the female artist focuses on male protagonists on purpose – without prejudice or embellishment. The work does not aspire to have feminist ambition as a documentary (‘look, this is what men are like’). Nevertheless, the confidence with which the author approaches the portraying is inspiring. She is self-conscious and she has an authority of a creator in the process. Even though the delicate girl with a piercing look is not present in her videos she constantly reminds us that these ‘documentary portraits’ are of her making and not an objective capturing of asexual reality.