The exhibition Liquid Crystals R0G0B255 is a part of the eponymous project currently developed by Jana Bernartová which focuses on the issue of digital colors and their interpretation. Digital color is virtual in its very nature, and is therefore realized differently on different devices and different displaying methods. 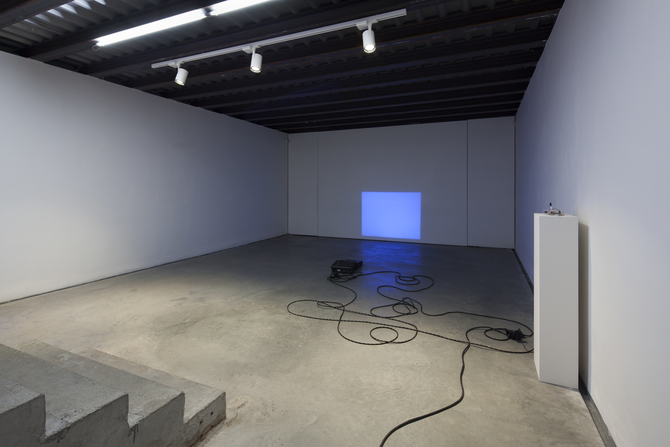 The relativity of existence of colors which may very well lack the Platonic essence of absolute ideas, being subject to changeability of the framework of perception (physiologically as well as due to cultural and language systems used, as was pointed out for instance by Ludwig Wittgenstein) is made even more evident in relation to digital transfer. The universal digital color expressed by means of unchanging code has, once it leaves the “black box”, various “incarnation” which show various deviation from their perfect digital archetype. These deviations nevertheless cannot be seen merely as defects – as the author herself says: “Given the fundamental properties of a digital work as defined by the theoretician Lev Manovich, several versions of a work may coexist at once and be modular.” Digital data, in its visual and non-visual form are to me a sort of alpha and omega – the central point of my interest.” Therefore also in relation to digital media, the illusory concept of an absolute ideal is replaced by coexistence of a plurality of realized versions.
The code included in the exhibition’s name hides a concrete type of the color blue, the one which many display devices (mainly projectors, but also certain types of TV or computer screens) use in their default setting when the device is turned on or in stand-by mode, for a purely practical reason – this color minimizes wear of the light source. the color is at the same time essentially identical to the traditionally popular shade of blue, ultramarine. The history of this iconic color (which has had its firm place for centuries in Western and Eastern painting as well as in Christian iconography and whose fame reached its peak in the 20th century in the symbolic act of its adoption by Yves Klein as IKB) therefore continues even today through its use in the field of “new media”.
Jana Bernartová chose two basic forms of output for the exhibition in the Plusmínusnula Gallery: projection and print. The moment of remediation of digital data into the form of a tangible artifact will focus in the actual booklet of the exhibition which will therefore function on the borderline between an applied object (medium for information) and an artwork forming an inseparable part of the exhibition. A more straightforward media incarnation of R0G0B255 is realized through a projector – even this minimalist solution nevertheless proves the relativity of a light-based output. The artist moreover programmed the projection so that it reacts to presence of gallery visitors in real time as well as to the color spectrum (or more precisely the spectrum of shades of blue) which changes with their presence or absence.