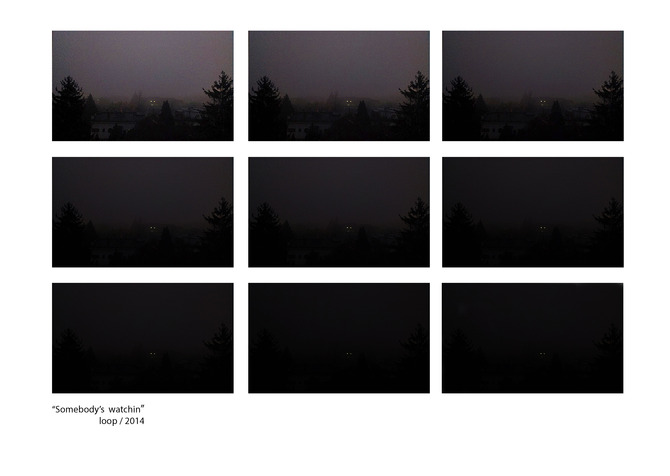 The video Somebody’s watchin (2014) is about an atmosphere, not about a story. We see two distant points of light in a landscape and it is slowly getting darker and darker, until nothing remains visible but these two never blinking “eyes”. Beyond its emphasized meditative and contemplative effect, the growing tension of the video is obviously generated by the unstoppable progress of darkness, the ineluctable disappearing of natural light while the two spots of artificial light stubbornly stare at us, in the heavy sound of the night. This very simple but effective scene presents a very large spectrum of possible associations, ranging from numerous filmographic references to the metaphorical evocation of the oppressive tools of control and surveillance in use during the communist regime, as the title of the piece suggests it, or simply to the nightmarish vision of an unidentifiable wild animal staring at us in the darkness. But the choice is up to the viewer and the fact that the tension of the video is somehow countered by the loop gives a humorous twist to it and the possibility for introspection and self-reflexion. Rona Kopeczky – Art Historian and Curator http://blog.works.io/featured-artists-august-2014/#more-189